Although there have been a couple of public conversations, generally lasting a few minutes each, in the Board of Education meetings since Barbara Walkley resigned in January as Beacon City School District superintendent, the discussion about finding a permanent successor is expected to begin in earnest at the board’s next meeting on Feb. 22.

The challenges facing the board are many — most notably repairing a rift with hundreds of Beacon parents who have called for more transparency, and finding an administrator who can lead a school system riddled by frequent turnover and accusations of impropriety.

Walkley had been dogged by controversy since she was hired permanently in February 2015. In August, 27 teachers were reassigned across various schools and grade levels, and many speculated that the moves were politically motivated.

A Beacon parent, Melissa Rutkoske, filed a petition in December with the state Department of Education, calling for the dismissal of Walkley and school system attorney Michael Lambert, after a series of emails between district officials and former teachers’ union president Kimberly Pilla were made public.

Rutkoske’s petition, which she said was filed on behalf of “many concerned parents,” alleged an inappropriate relationship between Walkley and Pilla, and that each worked behind the scenes to further an “unethical” agenda. 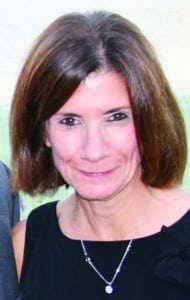 At an emergency meeting on Jan. 21, the school board announced Walkley’s resignation and named Deputy Superintendent Ann Marie Quartironi as interim chief. Walkley’s departure, almost exactly 12 months after she was named to the post on a permanent basis, marked the fifth time the seat has been vacated — not including interim superintendents — after longtime chief Vito DiCesare retired in 2006.

When Superintendent Jean Parr, who replaced DiCesare in 2006, took early retirement in 2008, Parr helped find her successor by screening resumes and forwarding candidates to the school board, said Larry Cohen, a member of the Board of Education at the time. After a handful of interviews, the board hired Fern Aefsky, who had previously led the Hudson City School District. Aefsky left the Beacon post in 2011.

At that point, Harvey Hilburgh, a retired superintendent who had served in interim capacities in other districts, took over as interim chief while the Dutchess County Board of Cooperative Educational Services (BOCES), an agency that provides shared educational programs and services to Dutchess school districts, led the search for a replacement.

The BOCES search identified multiple candidates, with the board settling on former Fort Lee, N.J. superintendent Raymond Bandlow, who lasted just nine months before resigning in July 2012. Hilburgh, along with Walkley, who had served as interim assistant superintendent during Hilburgh’s first interim tenure, returned again on a temporary basis.

Bringing Hilburgh and Walkley back “seemed like the right thing to do,” said Cohen, a former three-term board member who is now on the Fishkill Town Council. “When they were here the first time, by all appearances, they added some consistency.”

The district then enlisted Shaw, Perelson, May & Lambert, LLP, which supplies Michael Lambert, the Beacon school district’s attorney, and whose attorneys represent 60 districts throughout the Hudson Valley, to find Bandlow’s permanent replacement.

Paul Dorward, the former superintendent of the Berne-Knox-Westerlo Central School District in Albany County, was chosen, although his tenure, too, would be short. After his hire in 2013, Dorward left just over a year later, which led to Walkley — a familiar face by then — being named the interim superintendent in July 2014.

Now, tasked with replacing Walkley, the board’s choices are, again, to promote from within, utilize the BOCES search services or to hire a professional, and more costly, search firm. Current board President Melissa Thompson said earlier this week that she feels a professional search firm is the district’s best option, calling it an “investment,” even if it comes at a greater cost. 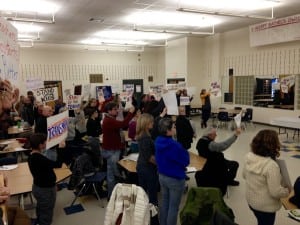 Beacon parents gathered in the high school cafeteria with signs of protest outside a closed meeting of the Beacon School Board on Jan. 14 (photo by J. Simms)

School board vice chair Bill Zopf has stated the same. “We’ve tried quite a few different methods over the years — some successful, some not,” he said during the Feb. 8 board meeting.

A search firm, however, may have difficulty finding qualified candidates. According to the New York State Council of School Superintendents (NYSCOSS), there are as many as 50 superintendent searches going on in the state — a number that Bob Lowry, NYSCOSS’s deputy director for advocacy, research & communications, characterized as “exceptionally high.”

“What we’re hearing is that many districts are having difficulty finding what they regard as superior candidates,” Lowry said, attributing that to financial pressures and statewide policy mandates that have made the superintendent position more difficult to navigate.

“We’ve found that boards have, in some cases, tried to demonstrate their financial concerns by constraining their compensation for superintendents,” he said.

The average superintendent’s salary in New York, according to NYSCOSS, is $170,706 annually. In the Beacon system, which Lowry said is considered a smaller urban district, Walkley earned $181,050.

However, Lowry said, Beacon’s recent history may turn off some prospective candidates. “Beacon has had extraordinary turnover,” he said. “I can imagine that will cause concern.”

That could lead to another discussion: should the Beacon board limit its search to candidates within New York, or cast a net beyond state lines?

Thompson, who has announced she does not plan to run for a fourth term on the Beacon school board this year, said that, personally, she would like to see the search extended outside of New York. She also understands that state-specific mandates could create a significant learning curve for a hire from elsewhere, although “I do think the right person will invest the time and energy needed to get up to speed.”

Yet another variable is community involvement.

The Advocates for Beacon Schools, a grassroots parents group formed in the wake of last year’s controversies, announced at the Feb. 8 board meeting the launch of an online survey, as well as mobile suggestion boxes at various locations in Beacon, to gather input to develop a “vision” for the next superintendent.

“We want to go out far and wide, so we can make sure as many voices are heard as possible,” said Kristan Flynn, a parent and member of the group.