If you’ve never seen eagle rays in the ocean, or whiptails flapping lazily around the National Aquarium, there’s a new place to catch a sense of these odd fish.

Multicolored cut-outs of spotted rays are among the lead characters in the exquisite and disturbing bestiary of 26-year-old Beacon artist Melissa Schlobohm in Better Off Together, now on exhibit at Garrison Art Center.

In nature, rays propel themselves by moving wide, wing-like fins. Here, they seem to be both of sky and sea. Earthbound animals also inhabit Schlobohm’s show, some real, and some imagined. But your attention keeps coming back to the rays, large and delicate, which gently wave when the main door of the gallery opens to let in a wintry blast.

The work is made at Schlobohm’s Fledgling Press, her relief-printmaking business housed in the garret of 45 Beekman St., Beacon. It is not too scary for children.

Schlobohm’s carved wood-block prints are hand-pressed, hand-painted, and then hand-cut from printmaker’s paper. After the rays, there are beetles, snails, fireflies, and bats, which populate a cavelike corner and a window looking out onto the Hudson.

There end the installation walls.

The other walls are covered in Schlobohm’s murals and framed prints of Through-the-Looking-Glass-like creatures and animal bodies with humanlike heads — her “behemoths.” 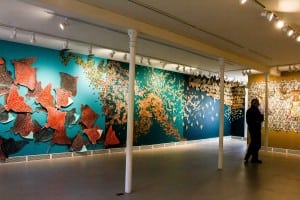 Schlobohm’s installations along south wall of Garrison Art Center (photo by A. Peltonen)

There are rat kings and kingfishers, hadjii, anglers, elephant shrews and “infestations.” Then there are the bird-skull “arches” that run above the baseboard.

Born on the road

Some of Schlobohm’s themes were born on a road trip West between her sophomore and junior years in college.

Away from her own northeastern habitat, she observed wild animals and bones that induced reveries about architecture, and how much it had in common with the skeleton or cartilage of animals.

“I began studying ecology on my own,” she says. “I saw so many bones in the desert. I started collecting bones, thinking about bones as architecture for animal structure, and expanding on that idea.”

The final, windowed wall of the south gallery is filled with giant, black images of forest predators. Some appear to be owls, wolves, and other animals that prey, until you get close enough to see they are nothing you’ve ever seen in a forest. 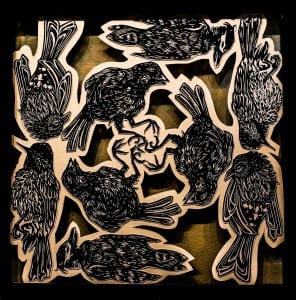 Framed birds by Melissa Schlobohm (photo by A. Peltonen)

Schlobohm is fine with whatever people perceive in her work, and brings forth the idea that the dual nature of humans and animals often goes unsung.

A figure can be “welcoming and menacing,” she says. “Pretty and ugly. Graphic and sporadic. Or dirty and clean.” It never has to be just one thing.

Schlobohm says she doesn’t work based on any “serious underlying tone or concept. I don’t like to block out my images.” Instead, she likes “uncovering” their identities only when she finally lays on the ink.

Perhaps that’s one reason they seem so alive, with the prints and 3D work handsome enough to make an art collector or game-lodge owner want to take them home.

That would actually be possible. Although Schlobohm’s work was rendered by hand for the show, the beauty of the wood-block process, she says, is its “economy.” Once she carves to her satisfaction, she will make editions of up to 10 of each image set. Each place it hangs will lend it a different aspect, so it will never be exactly the same twice. 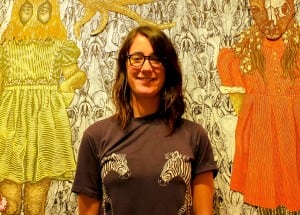 Melissa Schlobohm (photo by A. Peltonen)

Schlobohm entered Skidmore College in Saratoga Springs in 2008, intending to be a sculptor. Sophomore year, however, art classes filled quickly, and she was left signing up unenthusiastically for relief-printmaking.

The specific “physicality of the process” hooked her, though: the “carving, embossing, tearing paper, laying out the ink, even the smell of the ink,” she says. Compared with sculpting, printmaking kept her from overthinking and gave her a limitation she came to embrace: “You have to stop at a certain point before you overcarve.”

“Ninety-nine percent of the time … it’s a surprise what I end up with,” she adds.

While Schlobohm looks slight, working her presses takes strength. And she has worked them in some raw conditions. After leaving Skidmore, Schlobohm worked with a group of four guy friends in Cambridge, New York; Washington County was the only area they could afford. They worked in an old building that rented for $200 a month.

Eventually, they moved to Beacon. The men took jobs at an art foundry there. Schlobohm started her Fledgling Press.

Schlobohm says she chose the show’s title, Better Off Together, because “we all need each other. Living, traveling, mating: It is always more beneficial to be together than to be alone.” Additionally, she wanted the eagle-ray-to-bat swarm to show how “the spaces of different animals cross each other.” And to show bats “the way they hang in caves.”

Her bestiary even includes cockroaches. But these insects are unlikely to give you the stereotypical shiver-reaction. 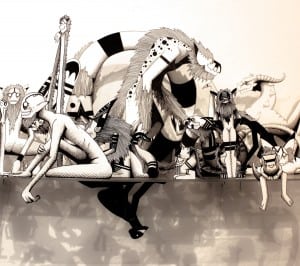 Kenny Harris’s A Lineage of Imagination is also on exhibit,. His cut-outs and mobiles are laden with mythological characters with names like Yggdrasil and the Beast of Dartmoor. (photo by A. Peltonen)

Even her rat kings are beautiful. From far away, they looked to one gallery-goer “like gingko leaves.” Why a rat king? “Because it’s this crazy mythological phenomenon,” the artist explains. (Rat kings, in lore, are multiple rats whose tails entangle them into a giant rat cluster.) “Ironically,” she adds, “rats are not better off together. They are really better off as … kings, leaders of the pack.”

That this does not match the show’s title doesn’t make her apologetic. It seems to thrill her. Melissa Schlobohm, it appears, prefers things unsettled.

Better Off Together continues through Sunday, Feb. 28, at the Garrison Art Center’s Riverside Galleries on Garrison Landing, which is open 10 a.m. to 5 p.m. Tuesday through Sunday. The gallery is also showing A Lineage of Imagination, with paper sculptures and drawings by Kenny Harris. Visit garrisonartcenter.org for more information.

Better Off Together from Katie Kearney on Vimeo.