Certain foods have a way of bringing back memories that haven’t been stirred for a while. It’s far more appetizing to relive a feast than a painful potluck (scorched gravy from summer camp, anyone?). Sometimes sentimentality works up a longing for that favorite food and these epicurean moments usually deserve the credit — or blame — for an appetite. When it comes to French onion soup, nostalgia takes over and I trail back to one of those happier meals.

On a recent chilly evening, four of us ventured out and ended up at 12 Grapes in Peekskill. The cold weather called for something warm, and we all settled on French onion soup. The dish, simple yet perfected with a bit of precision, made the ideal wintery supper. We finished off every sliver of onion, crumble of toasty bread and dripping of cheese.

It may have been the wine talking, but nostalgia warmed us further as we recalled our early introductions to French onion soup. My husband remembered feeling like a big deal leaning over a bowl of broth and delicate onions, and even detailed what he wore on the occasion: an off-white tuxedo fit for a six-year-old. Too tall to help as the ring bearer, he ushered at a wedding where reception guests celebrated with French onion soup. Onion soup still pleases crowds of all ages and it doesn’t break the budget. 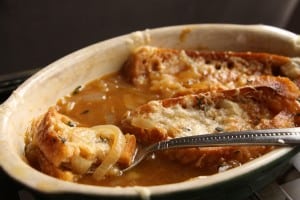 My own inspiration, served for decades at Famous-Barr, a St. Louis shopping landmark since retired into merchandising history by latest-owners Macy’s, looked more tempting than anything on a plate. My best friend’s dad brought me along on a Saturday excursion to see Santa and check out the festive window decorations. We were probably second-graders, far too mature to believe in the jolly old elf, but we played the part well.

Finally, it was time to sit down to lunch. I would have typically gone for a kids’ club sandwich and raspberry Jello served in a parfait cup, of course, but when I saw another diner eating a steaming bowl of the onion soup, I graduated to new tastes. It was a bowl full of softened lacey onions and gooey cheese goodness.

Many years and servings later, I no longer remember much about the store’s club sandwiches, but I can still smell the soup. The dish may not have been artful or elaborate but it had little competition and enjoyed a loyal customer base. Famous-Barr even sold the soup’s ingredients as if they were specialty supplies unavailable elsewhere. The effort exemplified clever marketing, but the product lived up to its reputation. Thin strips of golden onions hid beneath a thick slice of bread that floated in steamy broth and served as the base for a blanket of toasty Swiss cheese.

Fortunately, anyone can recreate onion soup at home with a few modest ingredients. Many variations appear around the Hudson Valley; whether they are called French onion soup, onion soup gratinée and potage d’oignon, they all pay tribute to the onion, the indispensable ingredient that’s affordable enough to keep on hand in large quantities. The version here suggests a lighter vegetable stock rather than the traditional brown beef stock generally found in the soup. I’ve tried both stocks and the vegetable brings the basic elements together with fine results. My attempt replicates a soup once famous for drawing shoppers into a retail outlet. The taste gave the soup its allure, but the experience made it a memorable meal.

Cut peeled onions in half and thinly slice. In heavy pan, heat butter and add sliced onions. Season with salt and pepper. Cook and stir onions over medium heat 25 to 30 minutes until softened and just golden brown.

Sprinkle in thyme and flour and cook over low heat 5 minutes. Add vegetable stock, stir, cover and simmer for 45 minutes.