Co-director will answer questions at Beahive

Older aficionados of cinema will recall the impact of Easy Rider when it opened in theaters in 1969: Motorcyclists on a rebel journey through the southwest of America to the beat of a rock ’n roll soundtrack (Born to be Wild), with money, guns and a lawyer played by a heretofore journeyman actor, Jack Nicholson. 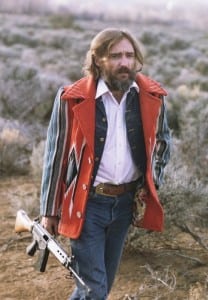 Dennis Hopper, in a scene from American Dreamer (publicity photo)

Co-starring in and directing the film was Dennis Hopper, an actor who had played many roles in film and television in the 1950s and ’60s. He teamed with Peter Fonda (son of Henry, brother to Jane) to play a pair of drug-dealing hippies off to see the country and perhaps find peace and meaning in some not-quite-articulated way. The music and photography more than any dialogue carried the message of the film.

Seen as groundbreaking in its capturing of a dark, poetic, reflection of the end of 1960s idealism at a time of tremendous social tumult, the film was a success critically and at the box office. For Hopper, the film’s achievement meant he had arrived at filmmaking’s mountaintop. He would soon learn that maintaining such a position required attributes not in his otherwise considerable toolbox.

Two years after Easy Rider, just as Hopper was in the midst of his second directorial effort, The Last Movie, which would crash and burn, a couple of other movie people, Lawrence Schiller and L.M. Kit Carson, decided Hopper would make a great subject for a documentary, given his creative accomplishments, personal anarchy, bad-ass attitude and roguish charm. Hopper apparently thought so, too. He not only cooperated, he more-or-less co-opted the film.

Never released commercially, The American Dreamer was pretty much lost, with only a few people having ever seen it. If you would like to be among a small but growing number of film enthusiasts who have, or you might enjoy a jolt of 1970s cultural history, your opportunity is at hand.

On Tuesday, March 8, the remastered documentary, sponsored by the Beacon Film Society, will screen at 7:30 p.m. at the Beahive in Beacon. Advance tickets can be purchased online.

While Hopper’s directorial career was short-lived, he did go on to create several memorable characters as an actor, such as the photojournalist in Francis Ford Coppola’s Apocalypse Now.

Schiller in the house

Co-director Schiller will be in attendance for a Q&A session after the screening. Schiller is a below-the-celebrity-radar individual who has worked many important and controversial stories as a photographer, television producer/director, researcher and filmmaker. Marilyn Monroe, O.J. Simpson and Gary Gilmore are among the subjects he has chronicled either visually or textually.

Schiller worked closely with writer Norman Mailer in the development of Mailer’s The Executioner’s Song about convicted murderer Gilmore who was executed by firing squad in Utah in 1976. The book won the Pulitzer Prize in 1980. Schiller then directed a television-movie version in 1982 in which Tommy Lee Jones won an Emmy for portraying Gilmore. 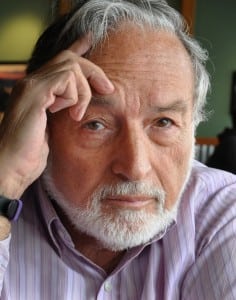 Schiller and Carson donated American Dreamer to the Walker Art Center in Minneapolis, which specializes in documentary films, for preservation after it made the college film circuit. Over time the center raised money for a restoration and proceeds from the new distribution benefit the center.

In published interviews, Schiller has described the making of American Dreamer as a struggle of wills between the filmmakers and the subject, which all gets documented in the final product, making for an out-of-the-ordinary expression of an individual’s struggle with the consequences of artistic and commercial success.