As the one-year anniversary of inmate Samuel Harrell’s death at the Fishkill Correctional Facility approaches, residents in Beacon continue to seek ways to ensure that what happened last April doesn’t happen again.

Beacon Prison Action (BPA), a community organization formed in the wake of Harrell’s death, hosted a forum Tuesday night (Feb. 23) at the Howland Cultural Center, where speakers discussed life behind bars and what they called the harsh realities of prison brutality.

“Most of us in Beacon know the Fishkill Prison is there,” said Jeff Golden, a Beacon resident and one of the organizers of BPA. “But most of us don’t really know anything about what goes on in there. Yet this institution has a profound impact on the lives of many people who work there and are incarcerated there, the murder of Sam Harrell being a horrific example of that.

“This was an important opportunity to create bridges between that world and ours, to help people get a better understanding of what goes on in there, to appreciate the humanity of the people in there, and to see how we can help make it a better place for everyone.”

In addition to Harrell, whose sister was present, much of the forum focused on, as moderator Paul Mersfelder said, the belief that a culture of violence remains “deeply woven into the fabric” of prisons in New York. 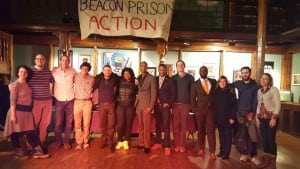 A lengthy investigation of Harrell’s death by The New York Times, published last August, cited the accounts of 19 inmates who said that as many as 20 officers kicked and punched Harrell, handcuffed him and dragged him down a flight of stairs. Prisoners claimed some guards shouted racial slurs at Harrell, 30, who was black.

The officers on duty at the prison, which is located in Beacon, told an ambulance crew that Harrell had overdosed on K2, a synthetic marijuana. However, the Orange County medical examiner (who had jurisdiction because Harrell was pronounced dead at St. Luke’s Cornwall Hospital) classified his death as a homicide. The term means a person’s death was caused by another, not necessarily that a crime was committed. The autopsy found no illicit drugs in Harrell’s body.

A New York State Police investigation was launched but, to date, no disciplinary charges have been filed against the officers accused of killing Harrell, Mersfelder said.

Harrell, who had bipolar disorder, was one of some 620 inmates at Fishkill who suffer from mental health problems, said Scott Paltrowitz, an associate director of the Prison Visiting Project of the Correctional Association of New York, at the forum. Those prisoners, as well as the elderly, are victimized by what he called an “entrenched culture of brutality.

“If you name any prison in this state,” Paltrowitz said, “you’ll have cases of extreme human brutality.”

A second speaker, Wesley Caines, a re-entry specialist and advocate for Brooklyn Defender Services, reasoned that the U.S. system of reform — one which he said uses force to gain a desired outcome — may not actually encourage the healthy rehabilitation of inmates. 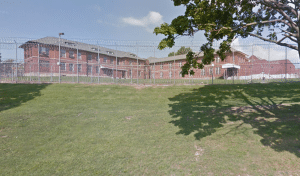 “We need to find out what created them,” he said. “What created that lifestyle? If you humanize them, they will humanize you, and that can only help the system.”

The effects of solitary confinement — described as “a space where you can touch both walls with your arms outstretched” — were also addressed. The Fishkill Correctional Facility is one of eight prisons in New York with solitary facilities. Harrell had completed a lengthy stint in solitary just days before his death.

Johnny Perez, an advocate at the Urban Justice Center Mental Health Project, suggested that prisoners be separated but not isolated. “You can hold somebody accountable but you don’t have to treat them inhumanely,” he said.

Above all, the speakers agreed, they seek not just accountability as it relates to Harrell, but an end to the violent culture of violence they said exists in U.S. prisons. By ending solitary confinement, for instance, and closing “infamously abusive prisons,” Paltrowitz said he believes the culture could evolve from one of abuse to one of empowerment.

Around 75 people attended the forum, inspiring Isaac Scott, the fourth invited speaker. Said Scott, a self-taught graphic designer and artist who was released early for good behavior after serving nearly eight years of a nine-year sentence in various New York prisons: “This [event] makes me feel like there’s a shot at change.”