The past week produced undeniable proof that spring is on the verge. Players headed south to limber up for the upcoming baseball season. And closer to home, maple syrup began to flow at the Taconic Outdoor Education Center (TOEC).

Pancake lovers can thank North America’s indigenous people for discovering the thick, sweet liquid — although they were more interested in producing hard maple sugar than syrup. And if simple is good, maple syrup has to be considered the best. Sap drained from sugar maple trees is boiled until it thickens. The result is maple syrup. End of story.

Locally, the liquid gold is produced at TOEC’s facility on Mountain Laurel Lane just off Dennytown Road. “Gold” is only a slight exaggeration. According to the USDA, the average retail price of a gallon of maple syrup in New York state last year was $45.

TOEC harvests sap at three local wooded areas, including from some 300 taps in the sugar maples at Hubbard Lodge just off Route 9. “We’ve collected about 1,000 gallons of sap so far,” said John Stowell, TOEC’s program director. “Trees have tremendous vascular structure,” Stowell said. “The average tap will produce up to 25 gallons of sap per season.” It takes 40 gallons of sap to make a gallon of syrup, and TOEC hopes to produce at least 100 gallons of syrup by the end of the season, which will come in early April if the weather cooperates, he said. 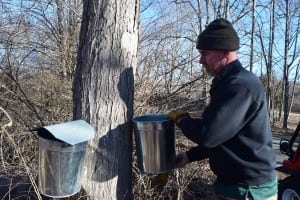 Asked if tapping can harm trees, Stowell joked: “I’ve never had one complain!” He added, “We harvest such a small amount of sap in relation to what each tree can produce. I equate it to a human donating blood.”

Climate change has not been a major factor in maple syrup production, although Stowell said research has shown the range of sugar maple trees is retreating north. Whether a particular winter is severe or mild is also not critical; it’s all about the weather once the trees are tapped, he said. Cold, frosty nights followed by warm sunny days are ideal for sap production — exactly the type of weather experienced recently. Stowell said TOEC produced about 80 gallons of sap during last year’s cold winter and shorter harvesting season.

Once harvested, the raw sap is boiled down in a wood-fired evaporator. “We can process 200 gallons of sap per hour,” Stowell said. Sap turns to syrup when it reaches 219 degrees Fahrenheit, or seven degrees above boiling point.

From delicate to robust

Maple syrup changes from a light color and delicate flavor early in the season to darker and more robust later. “Currently we’re producing Golden Delicate,” Stowell said. “As the season progresses it will change to Amber Rich and Dark Robust. It is not uncommon for the grade to change back and forth at various times during the season.” 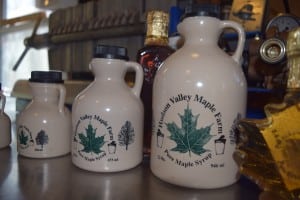 The final product on sale at TOEC (Photo by M. Turton)

Syrup is made from the sap of the sugar maple (acer saccharum) because, of the more than 100 species of maple, it contains the most sugar, about two percent by volume. “All maple trees can be tapped,” Stowell said. “But the others require a bit more work. Red maple requires 80 gallons of sap to make one gallon of syrup.”

TOEC sells its maple syrup at the nature center. Maple syrup events are planned at TOEC on March 13, Sharpe Reservation in Fishkill on March 19 and Little Stony Point on March 26.

One thought on “Let the Sap Flow”