The Irish actor Mikel Murfi will perform The Man in the Woman’s Shoes at Arts on the Lake on Saturday, March 5.

Originally developed at the Hawk’s Well Theatre in Sligo County, Ireland, the one-man show won the Stewart Parker BBC Drama Award in 2013 and was nominated for the Best New Play in the Irish Times Theatre Awards in 2014. Last year, it was a New York Times Critic’s Pick when it played at the Irish Arts Center in New York. 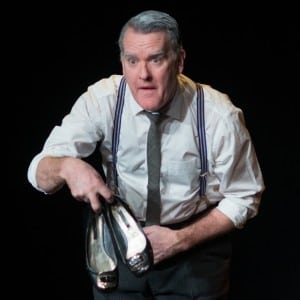 Created by interviewing people in rural Ireland, The Man in the Woman’s Shoes tells the story of cobbler Pat Farnon as he walks five miles into town to deliver a pair of shoes to Kitsy Rainey, a “screeching tyrant of a woman.”