And their many friends

Beacon will hold its first St. Patrick’s Day parade in 25 years on Saturday, March 12. Dubbed the Parade of Green, it begins at 11 a.m. on Main Street with floats, marching bands and community members. 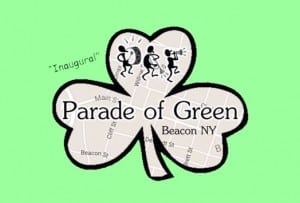 The Dutchess County parade, now in its 21st year, takes place a week earlier, on Saturday, March 5, rain or shine, beginning at 1 p.m. at West Main Street, ending at Mesier Park, in Wappingers Falls. Last year around 10,000 spectators watched it wind its way through town. The Hudson Highlands Pipe Band is one of many performers. Visit dcsppc.org for details.

Peekskill’s parade (in its 27th year) will be held on Saturday, March 12, at 3 p.m., preceded by a Mass at Assumption Church at 1:30 p.m. and a grand marshal’s brunch at the Elks Lodge at 1038 Brown Street from 11 a.m. to 1 p.m. Marchers make a left on First Street, then right on Union Avenue, right on South Street, left on Division, right on Main, right on James, and right on Brown. The reviewing stand is on the corner of Park and James.

Finally, the Northern Westchester and Putnam Counties parade (40th year), the third largest in New York State, takes place at 2 p.m. on March 13 on Route 6 in Mahopac. The step-off is at the corner of Croton Falls Road and Route 6. Buses will run starting at 11:30 a.m. from the K-Mart Shopping Plaza to the corner of Route 6 and Croton Falls Road. The Knights of Columbus Council 6318 and The Fraternal Order of Police Stephen P. Driscoll Lodge 704 will host a post-parade celebration at 10 Fair St. in Carmel from 3 p.m. on — with a corned beef dinner with soda bread, Guinness on tap and music with Liam O’Riordan (“direct from Cork”) and the Stephen P. Driscoll Pipe Band and dancers from the Kelly-Oster School of Dance.

On Thursday, March 10, the Kelly-Oster School of Irish Dance will perform at 6:30 p.m. at the Desmond-Fish Library in Garrison. Kerry Kelly-Oster, founder of the school, which has locations in Hopewell Junction and on Long Island, traveled the world with her family, growing up competing and performing in Irish dance. The Kelly-Oster School has won multiple titles across continents, including in Ireland, and has performed at Radio City, Carnegie Hall and the White House. This event is free. Dancers from the school will also be participating in several parades, including those in Peekskill, Mahopac and Wappingers Falls. 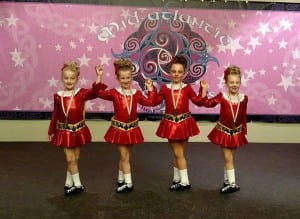 Dancers from the Kelly-Oster School of Dance (Photo provided)

In a performance marking the 100th anniversary of the 1916 Easter Uprising against British rule, which led to Ireland’s independence, Tompkins Corner Cultural Center in Putnam Valley will present A Nation Once Again at 7:30 p.m. on Saturday, March 12, with songs and stories from the period. It will feature actors, singers and musicians playing mandolin, whistle and bodhran, along with fiddle and guitar, and tell the story in two acts that combines dramatic narrative with period songs and poetry. The writer-director is Neil Hickey, a journalist and author and Putnam County resident for more than 50 years. He is the offspring of immigrant Irish parents from the village of Ballinspittle in County Cork and a student of Irish literature and history. Tickets are $15 for adults, $10 for students and seniors and $25 for families at brownpapertickets.com. The center is located at 729 Peekskill Hollow Road. 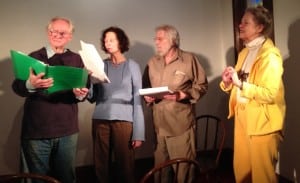 The 1916 rebellion is also the subject of an Easter Uprising symposium hosted by Mount Saint Mary College in Newburgh beginning at 1 p.m. on Saturday, March 19. The three-hour event will include workshops led by faculty members, followed by a panel discussion. The workshops include Poems of the Rebellion: From Yeats to Heaney, 1916 — The Pivotal Year, Celtic Spirituality — Beauty Ever-Ancient, Ever-New and In Their Own Words: Witnesses to the Easter Uprising. The keynote address, The New York Carmelites and Irish Independence, will be delivered by Vincent Begley, archivist for the Carmelite Friars in the North American Province of St. Elias. The symposium is free and takes place in the Hudson Hall auditorium on campus at 330 Powell Ave. Reservations are required. Call 845-569-3467 or send an email to [email protected]

The links between religion and music in Ireland are evident at a musical event, Celtic Crossings, to benefit the Franciscan Sisters for the Atonement at Graymoor. It will be held at the Paramount Hudson Valley in Peekskill at 7 p.m. on March 16 and feature the songs of Phil Coulter performed by tenor Andy Cooney, Geraldine Branagan and the Irish Pops Ensemble. Tickets are $30 to $55 and are available at paramounthudsonvalley.com. 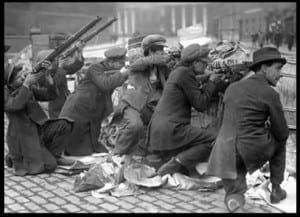 Irishmen take up positions during the Easter Rebellion of 1916.

The Friars at Graymoor will host a corned beef and cabbage buffet on Sunday, March 13, at 12:30 p.m., immediately following the 11 a.m. liturgy. It will take place in the Friar’s Dining Room in the 5th Floor of the Graymoor Spiritual Life Center, 40 Franciscan Way, Garrison. A limited number of loaves of homemade Irish soda bread will be available for purchase by the dining room at $4 per loaf. The friars ask for a donation of $20 per adult and $10 per child aged 6 and older. Make your reservations by Wednesday, March 9, by calling (845) 424-2111 or email [email protected]

If you fancy a bit of broad comedy, Kevin Alexander’s Finnegan’s Farewell is returning, or, as the producers describe it, being resurrected, at The Beacon Theatre. Audience members will witness an Irish wake for the dearly departed and beloved postal worker, Patrick James Finnegan, who won $2.2 million at the slots during a day trip to Atlantic City but fell off a ladder while painting his house soon after. At the performance, the audience will be treated to eulogies, sing-alongs, dinner, a cash bar and the reading of Paddy’s will. Finnegan’s Farewell will be performed at 7 p.m. on March 11 and 12 and March 18 and 19. Tickets are $25 and available at thebeacontheatre.org.

Irish actor Mikel Murfi will perform his one-man show, Man In The Woman’s Shoes, at the Flatz Ballroom at 1008 Main St., in Peekskill at 3 p.m. on March 6. Presented by Peekskill’s Embark and The Flatz in association with the Hudson Valley Irish Center and the Irish Arts Center of New York City, the play tells the tale of a man named Pat who walks the five miles from his cottage to town and back again, meeting a vivid tableau of personalities. All of these characters, as well as a wide range of farm animals, dogs and bees are brought to life through Murfi’s plastic features and vocal range. Tickets are $20 at embarkmaninwomanshoes.bpt.me. 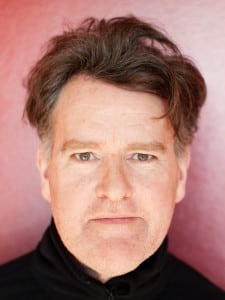 A Peekskill pub crawl departs at 6 p.m. on March 17 from the Elks Lodge and calls on The Hudson Room, Gleason’s, NY Firehouse Grille, Kyle’s Pub, Birdsall House, Division Street Grill, Ruben’s Mexican Café and The Quiet Man Public House, before 10 p.m., when the unveiling of the Grand Marshal Plaque will take place.

See our calendar for last-minute updates or additions.

One thought on “A Schedule for the Irish”