The Paper hosted a forum on Feb. 29 with the three candidates running for two seats on the Cold Spring Village Board — Lynn Miller, Barney Molloy and Steve Voloto. Moderated by Managing Editor Kevin E. Foley and myself, it can be viewed here. The election is Tuesday, March 15.

Candidates were asked how the village might reduce spending in light of the state-imposed cap that limits any increase in the 2016-17 tax levy to $1,800 on its $1.6 million budget. Specifically, they were asked if the $400,000 annual cost of the Cold Spring Police Department could or should be reduced.

The three candidates at the forum.

Molloy, the former planning board chair, acknowledged that while there is always a cost to policing, CSPD represents 30 percent of the levy. “There’s got to be ways to deliver that service more effectively, more efficiently,” he said. The Putnam County Sheriff’s Department recently renewed its Nelsonville substation and Molloy said a partnership with the sheriff or state police might enhance police coverage while reducing costs.

Miller, a Main Street business owner, commented that disbanding CSPD in favor of policing by the county isn’t “an either-or situation.” She added, “We have to find economies where we can, but need to preserve community policing.”

Voloto, a carpenter, said the issue requires serious study and questioned disbanding CSPD. “Is it really worth the sacrifice [to lose] officers who really know the community just to save a couple bucks?”

Voloto urged looking at consolidation of municipal services “really carefully before entering into any binding contracts, to be sure it’s good for the village.” He said he supports merging the village’s building department with that of the Town of Philipstown, but only if Cold Spring retains some oversight. “Village needs are a little different than the town’s,” he said. “There are a lot of old buildings and unique situations [here].” 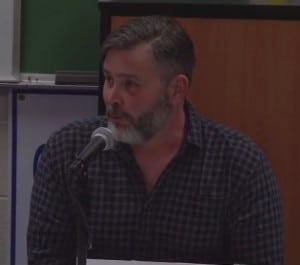 Molloy suggested replacing the practice of rolling the current budget into the next year with only minor adjustments in favor of zero-based budgeting, with all spending having to be justified annually. He also advocated reducing legal costs. “I don’t think there’s a conscious [recognition] that whenever you speak to a lawyer there’s always an inherent cost,” he said.

He also spoke against large year-end undesignated fund balances. Excluding funds reserved for the Main Street Project, Molloy said the current fund balance “is almost 20 percent of our budget,” whereas most municipalities keep it at about 10 percent. “We don’t need to keep $250,000 around for a rainy day,” he said. “It should either be returned to taxpayers or earmarked for infrastructure costs.”

If there is unanimous agreement among the candidates on any issue, it was over the need to increase and diversify village revenue.

“Parking meters [on Main Street] can solve a lot of problems we face, particularly revenue that is not a tax on village property owners,” Miller said. “Smart meters can be programmed any way we want, [including] low fees when parking demand is low and higher fees when demand is high … or no fee when someone wants to park and run [into a shop] for 15 minutes.”

Voloto agreed. “The technology is really amazing,” he said. “But what I would really like to see in the meantime is the police department enforcing the parking regulations. I don’t see it happening. I’d like to push hard to see that the rules we have are being enforced evenhandedly. “ 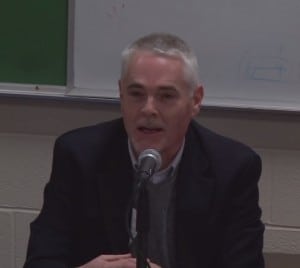 Molloy also saw no downside to meters, but said they have to be part of a larger solution. Meters could bring in from $100,000 to $300,000 a year, depending how they’re programmed, he said, but the village first needs “a workable parking permit system” for residents.

Molloy said that visitors he’s spoken with can’t believe they don’t pay for parking in Cold Spring. He suggested rates be set higher on weekends. He also said that higher rates early on weekday mornings would discourage commuters from parking on Main Street and that rates could be reduced in mid-morning once shops are open.

Miller added: “If we put our heads together, we can put a system in place fairly quickly that is going to solve these problems and be fair to everybody — residents and visitors alike.”

The Cold Spring Boat Club site and the highway department yard on Fair Street, both owned by the village, and Dockside, owned by New York State Parks, were each mentioned in the 2012 Comprehensive Plan as possible sources of revenue.

“The boat club is one of the most valuable assets we have as a community,” Miller said, adding that she is committed to finding a way to develop the property that preserves the club’s access to the river while enabling the village to generate revenue from docking and launching fees. “I believe there’s a way to keep members of the boat club happy [while] also opening up the use, inclusive use, of a valuable property that belongs to all of us,” she said. In Miller’s view that includes looking at the entire riverfront in more detail than the Comprehensive Plan. 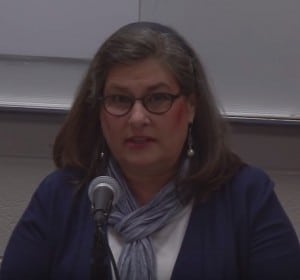 Voloto said “anything is possible” for the future of the boat club, but said he needs more information about the issues involved, as well as information regarding potential of the highway garage. “If someone has an idea or proposal I’m glad to hear it,” he said. He also feels the village should pursue management of Dockside with State Parks. He said the village is allowed to profit from use of the area and that while a permanent structure likely wouldn’t be allowed, “weddings, small concerts, food trucks and any number of creative things” could generate revenue. “It’s worth looking into,” he said.

Molloy disagreed with Voloto, saying that agreements with New York State Parks are so restrictive that the village should leave management of Dockside to the state. He does, however, see considerable potential for the highway garage and the boat club site. “Let’s cast the net out there” by putting out a request for proposals to develop the highway garage, he said. “Let’s find out what’s available and we might not be having this conversation about revenue next year. We might be arguing about what we want to see there ….” He said that an intermunicipal agreement with the Town of Philipstown and Putnam County could be one way to free up the highway garage in order to develop the property.

Molloy said a candid conversation is needed regarding the boat club’s future. “They’re an important part of the community,” he said, “but like everybody else they need to share.” He said the site can be developed in a way that generates revenue, but that neither the village nor the boat club can afford to do it alone. “What we can do is partner with a private concern or larger government concern and generate creative ways to do that.”

Candidates were asked to briefly identify one important project they would want to work on if elected. “The Comprehensive Plan is an important blueprint for the village,” Voloto said. “It bears study on my part.”

Tourism is of special interest to Miller. She said that as a business owner who gains revenue from tourism, “I want to work to mitigate its impact on residents.” She was critical of the state and county for their perceived lack of support. “I send a whole lot of money to Albany and Carmel and it never comes back to us,” she said. “Carmel is happy to pour money into tourism that lands in our laps but they don’t help us. They don’t give a dime and they don’t give a damn about what it costs us.”

“It’s really about asset management,” Molloy said. The village “has no idea what it owns, what condition it’s in and what the shelf life is.” He also cited a need to plan beyond the retirements of a number of key village employees.