Everybody’s favorite heard-but-not-seen morning voice, Kacey Morabito Grean, a Cold Spring resident whose “Mike and Kacey In The Morning” show is a fixture on 100.7 WHUD-FM, will be seen and heard on Sunday, March 13, as she and MAYfest organizer Melia Marzollo present a day-long series of workshops and classes for women focused on the spiritual, physical and social well-being — how to try to achieve a kind of happiness and techniques for the maintenance of it.

Their event, called “A Day of Health and Happiness for Women,” evolved from symposiums that the then-called Hudson Valley Hospital presented each October in Cold Spring until three years ago. Grean took part in many of those events, and she missed them. She says she realized, together with a friend, that “hey, we can do this.” So they did, presenting a well-attended day for women in Croton in January 2015. 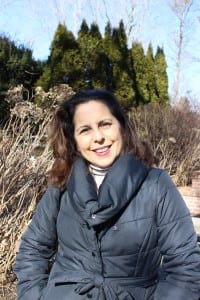 Kacey Green (photo by A. Rooney)

Every month since then, under the banner of “A Circle of Women,” Grean has organized small activities, often hikes, to gather women together in outdoor, contemplative pursuits.

Grean’s interest in the mind-body-spirit spectrum extends to her radio broadcasting as well. In addition to her morning show, which airs weekdays from 5 to 10 a.m., she hosts The Health and Happiness Show on Sunday mornings at 6:30 a.m., which allows her to “sleep in.” She describes the show, which is available as a podcast on KaceyRadio.com and shared throughout the day on Friday as “Health & Happiness Minutes,” as a forum where “healers, doctors and dreamers share ideas to make your life richer.”

In addition, Grean has turned to motivational speaking, presenting a talk, “Everything I Need to Know I Learned On the Radio,” throughout the tri-state area, including at 12 Grapes in Peekskill on Sunday, March 6 (call 914-737-6624 for reservations). “Radio has taught me what my purpose is,” she says. “I found that when I bring my best self to the radio, my purpose is to serve, even though that may sound hokey. Through it we have so many opportunities to touch people .… I try to take my time and make connections.”

Envisioning a larger scope of arrangements, Grean reached out to Marzollo, who owns SkyBaby Yoga and Pilates Studio in Cold Spring and last year launched a multi-day music, art and yoga festival at Lake Surprise called MAYfest. Grean, who practices the Japanese healing art reiki, conducted sessions in the healing tent at the event.

What they’ve pulled together is a day of activities and togetherness for women. After a continental breakfast buffet and welcome from the co-hosts, breakout groups will begin, each facilitated by a woman and, in the case of the physical side of things, sectioned into different fitness levels so no one will feel pushed too hard, unless that’s expressly what a participant is looking for.

Three morning workshops focus on the body. The gentlest is Nottingham’s Qigong healing instruction, which Grean describes as the root source of many healing practices. For those seeking something less reflective, Phoebe Miller, founder of nOMad, will conduct a “mindful” Vinyasa session, a yoga-based class designed to get the kinks out — gently, yet with enough to invigorate through rhythmic movement. Core to the Floor is more vigorous, as Paula Carnabuci conducts a workout utilizing the Correctform mat, along with resistance bands and light weights.

The second group of workshops shift toward the spirit. Options include a talk by Grean with a guided meditation at the conclusion. Or attendees can try “The Celestial Map; How Astrology Offers Both Inner & Outer Guidance,” presented by Demitra Vassiliadis of Heaven to Earth Astrology. The third session will be a demonstration of aromatherapy and hand massage with Cold Spring holistic nurse Patricia Traina.

Vendors, among them nutritionist Holly Shelowitz and Healing Facials’ Joan Forlow, will have tables for browsing during a healthy lunch buffet. Rock violinist Daisy Jopling will play throughout the day. After lunch, attendees will join in a 90-minute seminar, presented by Kelley Amadei, about how to uncover those habits in your life which are getting in the way of living a “best life.” The day will end in a closing circle, guided by Practical Intuition author Laura Day. 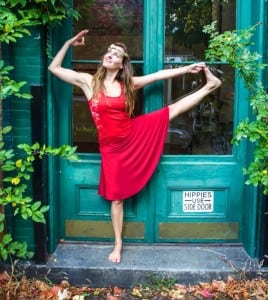 Melia Marzollo, posing outside the entrance to the Skybaby Yoga buiding in Cold Spring.  (Photo by Robert Sturman)

It wasn’t intuition that brought Grean to her now-unusual occupation of radio host. It began when she was chosen as a seventh-grader at St. Patrick’s School in Verplanck to read a public service announcement for a walk-a-thon over the air from WLNA in Peekskill. “I heard my voice coming out of the radio and was amazed,” she recalls. She studied journalism and media at Mercy College and returned to WLNA seven years after her first visit as a college intern before moving across the hall to WHUD. She left soon after for New York City, where she had a job lined up with Lite FM, but it fell through. “WHUD called, and I returned,” she says.

Grean has the unusual experience of having a particular part of her recognized with regularity: her voice. It happens frequently, where she is anonymously doing something, then speaks, and can immediately see recognition take hold. She’s also aware of the companionship and solace she has brought to listeners, one of whose family members shared with her that during some tough times, “I was her voice through the night. That brought me to my knees,” Grean says.

While working that night shift, Grean had her days free, and she’d often come to Cold Spring and sit by the river. “One night the [work] phone rings, and it’s a woman with an Irish brogue, saying she lived in Cold Spring,” Grean says. “I said ‘Oh, I’ve always wanted to live there.’ She told me to call a number, that she knew of an apartment.”

Grean has been in Cold Spring ever since, cementing the move with wedlock. Eight years ago, her chiropractor, whom she happened to go to school with at St. Patrick’s, told her: “You’re not married — you should meet my carpenter.” A blind date was arranged, and the radio host and Mike Grean met at the bar at Riverview Restaurant. Nancy Montgomery, who was working behind it, said “Mike and Kacey” (echoing the name of the radio program), and that was that. Kacey and Mike, who owns Grean’s Contracting, married two years to the day after that first date.

The Greans won’t be leaving Cold Spring anytime soon. “I’m not over Cold Spring,” Kacey Grean says. “When I drive up Main, I look in the rearview mirror and see those mountains. Cold Spring was my best friend all those years when I worked at night. I can’t imagine leaving this town.”

Tickets for “A Day of Health and Happiness for Women,” which takes place from 9:30 a.m. to 3 p.m. on March 13 at Dutchess Manor, 263 Route 9D, between Cold Spring and Beacon, cost $80 each and can be purchased at eventbrite.com.