Mayor and outgoing trustee square off over legal fees

The Cold Spring Village Board conducted an arduous line-by-line review of the village budget at its meeting on Tuesday, March 1. The review was the first step in the preparation of a spending plan for the 2016-17 fiscal year and took up nearly the entire marathon two-and-a-half-hour meeting.

The budget must be approved by the end of April. Village Accountant Ellen Mageean stressed that the numbers she provided on Tuesday were very preliminary. The most onerous challenge facing the board is to limit any spending increase to $1,880 within an overall operating budget of $1.6 million. The strict limit is due to a state-imposed tax cap, and property taxes are by far the largest source of revenue for the village. 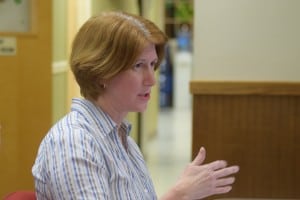 The board’s task is made more difficult by the fact that some areas of spending, such as employee benefits, will increase more than the cap, something that may require spending reductions in other, yet-to-be-determined areas. No major actions were taken as part of the preliminary review. Trustees made relatively minor adjustments and Mageean will provide new totals at the next board meeting.

Approval of bills is normally the most routine item at board meetings. That was not the case on Tuesday.

A heated debate began after Mayor Dave Merandy presented a printed summary of legal fees paid by the village so far in this fiscal year. He indicated the billing at the beginning of his term had been high, in the range of $5,000 per month, but that “we are moving on a downward trajectory.” The mayor said he questioned invoices from the village attorney and that after a detailed review had spoken with one of the firm’s partners, resulting in a reduction of more than $3,500. He also requested that the firm be more prompt with its billing.

Merandy’s summary showed that fees for general legal advice total $51,776 between June 1, 2015 and January. The most recent invoices averaged $3,000 per month. At that rate, the $15,223 remaining in the budget for legal fees through the end of the fiscal year (May 31) will be sufficient. 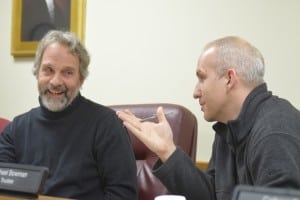 The exchange between Merandy and Bowman was not as friendly as this photo might indicate. (Photo by M. Turton)

The tension arose when Trustee Michael Bowman complained that he had not received the summary of legal costs in advance. Merandy replied that the latest invoice had not arrived until late morning or early afternoon on Monday, the day before the board meeting. Bowman said he would have reviewed the information had it been emailed to him earlier that day, prompting the mayor to respond sarcastically, “I’m sure you would have …”

Later during the discussion of legal fees, Bowman questioned an invoice from last fall that included an inquiry to the village attorney regarding appointment of relatives to village boards. Merandy said he had asked about the possibility of appointing his wife, former trustee Stephanie Hawkins, to a board, adding he thought Bowman “would enjoy” such a move. The mayor said he had not actually intended to make such an appointment but wanted to know if it was legal.

Trustee Fran Murphy said she had also inquired as to whether her husband, Ed Murphy, would have to resign from the Zoning Board of Appeals after she was elected to the Village Board.

Bowman also complained about a $1,000 fee for a legal opinion regarding the possibility of the village elections being moved from March to November, a cost the trustee said was not justified given the tight village budget. Merandy defended the cost, stating that the change of election date would save the village considerable amount money. It has been estimated that the village would save about $6,000 by holding its elections in November with the full cost being absorbed by Putnam County Board of Elections.

At one point Bowman said he had come to Tuesday’s meeting prepared to file a Freedom of Information Law request for data on village legal fees had it not been provided that night. Merandy was clearly nonplussed, expressing disbelief that Bowman felt he had to FOIL such information. The “discussion” quickly degenerated. Merandy suggested that Bowman was being fraudulent in accepting his stipend for continuing as a trustee after moving to Nelsonville. Bowman responded in part by questioning Merandy’s place of residence. The mayor lives on Academy Street in Cold Spring, having moved there after he and Hawkins married. He continues to own another home outside the village.

Toward the end of the meeting trustees voted unanimously to eliminate a separate budget account for special legal counsel, an issue that had seemed to cause confusion in some of the billing for legal fees. The account for general legal advice remains intact.

One thought on “Tough Budget Prep for Cold Spring”