Sandy Galef, who represents Philipstown and river towns south in the state assembly, has introduced a broad ethics reform package of legislative bills she said is intended to “create a distance between those who seek to influence the laws and those who make them.”

The Democrat’s proposals, which she introduced at a news conference in Albany last week, target inequities of power, ethics and transparency in state government. She said her proposals have received more attention than she might have expected only because “the media in Albany is hungry for someone to talk about ethics.” 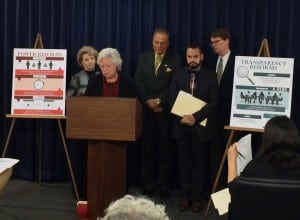 A new Siena College poll found that 89 percent of New York state residents believe corruption in state government is a serious problem, which is not surprising given the cascade of indictments, trial and convictions of state legislators that culminated last year in the convictions of Assembly Speaker Sheldon Silver and Senate Majority leader Dean Skelos.

While it is unclear if most of Galef’s proposals will have enough support among her colleagues or the governor to become law, Galef said in an interview with The Paper that she “felt an urgency” to go forward in light of the two high-profile convictions. She said an effort needed to be made to turn around negative public perceptions of state government and cited Silver’s defense lawyer’s statement that, “This is the way Albany operates” as an indication that the situation has reached a low point.

“I don’t think it has to be that way,” she said. “If ever there was a time for us, as legislators, to proactively work together to enact true and serious ethics reform that rebuilds public trust in the way government works, it is now.”

Among the 15 pieces of legislation Galef proposes are:

Galef’s proposals strike at the heart of Albany’s political culture. Anyone familiar with legislative sessions, which typically run from January to June, knows that fundraisers for legislators, attended by people with business before the committees a particular legislator serves on, are a staple of the social scene.

Galef acknowledged that some people, including colleagues in the legislature, believe you cannot regulate an individual’s behavior or tendency toward corrupt acts. But she argued she thought it was the legislature’s duty to “create roadblocks” to that behavior. “While a public official’s conscience and behavior cannot be legislated, opportunities for illegal activity — or at the every least those that skirt the boundaries of ethics — can be removed,” she said.

When pressed, Galef admitted she did not think the issues she is raising are at the top of agendas of either the Assembly, the Senate or Gov. Andrew Cuomo.

The Assembly, controlled by the Democrats and led by Speaker Carl Heastie, created a task force last year to study the ethics issue. It has yet to report any progress but is expected to introduce recommendations during this session. Galef said she twice delayed introducing her legislation thinking it better to wait for the task force. “But I decided to go forward to make sure my bills would be on the agenda,” she said.

Galef expressed little optimism about having hearings on her legislation, acknowledging such activity is not a favored Albany practice. She also said she didn’t care if her bills were the ones ultimately passed. “But I do hope we end up addressing the issue with something of substance.”

A5495: Allows all bills to carry over during a two-year legislative session and keep their places on the legislative calendar between the first and second year.

A4425: Restricts transfers of campaign funds between political candidates.

A7000: Prohibits election commissioners from also being chairs of political parties.

A7415: Prohibits elected officials from serving as delegates to the Constitutional Convention.

A5006-A: Prevents members of the legislature from giving public money to business entities and non-profits in which a family member is associated.

A6585-A: Creates a “firewall” between the professions of certain political consultants and lobbyists.

A4671: Prohibits political fundraisers in the county of Albany during the legislative session.

A5884: Requires forfeiture of pension and retirement benefits from elected officials convicted of felonies.

A9180: Enacts “The Consulting Act” mandating registration and disclosure requirements of consultants similar to that of lobbyists.

A8622: Prohibits the name change of a political party once it has achieved permanent ballot status.

A4390: Requires legislative fiscal impact notes to include objective calculations of anticipated economic impacts for the following three years.