The Demon Barber at Haldane

After the silliness of last year’s Haldane Drama production of The Pirates of Penzance, and the similarly comedic musicals that preceded it, Sweeney Todd is a giant change of pace. But with many students very familiar with the film, or at least the plot, it was embraced by the actors, who will perform the musical at the high school at 7 p.m. on Friday and Saturday, March 11 and 12, and at 2 p.m. on Saturday and Sunday, March 12 and 13. Because the audience will include younger students, some concessions were made, so although (spoiler alert) the slashings will be shown, there will be no gushing blood. There will be an ingenious “trap-door” chair through which some characters may meet an untimely demise. In addition, one song, which has overt sexual references, has been cut. 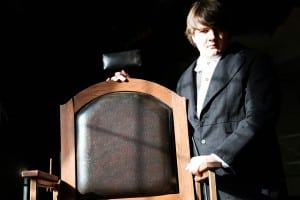 Dante Nastase, who portrays Sweeney Todd at two of the performances, next to the infamous chair.  (Photo by Jim Mechalakos)

The students have been challenged by the music. In addition to the usual twists and turns of Stephen Sondheim’s lyrics (some consider this show his finest score), there are multiple ensemble numbers with multiple parts and cues. The two leads have extensive, complicated songs. As is now standard with Haldane Drama, director Martha Mechalakos has double cast the show, with one group of principals performing the Friday night and Saturday matinee shows, while the second takes on Saturday night and Sunday matinee. The same ensemble performs all four shows.

Dante Nastasi, a Haldane senior who will portray Sweeney in the first two performances, before senior Theo Henderson takes the role, in his program biography described his feelings about the character. 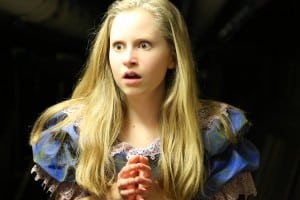 “I first saw Sweeney Todd when I was a freshman,” he wrote. “I fell in love with it almost instantly. I literally haven’t been able to stop listening to the songs since then. I would even sing them with my fellow acting friends while we were backstage working on other, completely different musicals! And I would constantly daydream about one day maybe getting to act in a production of the show.

“Well, here I am four years later and not only am I acting in it, but I get to play Sweeney! I can never thank our director Martha Mechalakos enough for helping me make this dream of mine come true. I’m … so happy to be doing this I can barely find the right words. I’ve been acting with Haldane Drama since the sixth grade. I’ve made so many unbreakable bonds, learned so many skills, and I’ve had experiences you wouldn’t believe … Enjoy the show! But if you don’t I would be happy to give you a nice shave!”

The musical’s book is based on The String of Pearls, an 18-part serial written by a hack writer/slash/publisher (read into the use of slash as you may) Edward Lloyd in 1846-47. He shared the tale of a certain “Demon Barber of Fleet Street” who returns to his East End haunts with a bloody mission.

Lloyd, who was known to have purloined plots from Charles Dickens, seized upon the ambiance of the more scurrilous precincts of London in the creation of this 19th-century serial killer and his female accomplice and the sailors, judges, wards, orphans and impresarios, not to mention a supercilious beadle, who surround them. Presumed by many, then and now, to be ripped from the headlines, the story proved to be catnip for readers. The tale of the unbalanced barber wielding his knives was immediately turned into a play, which by 1852 had been produced in the U.S. 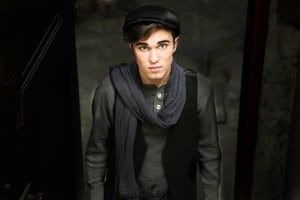 Jeremy Roffman, as a lovestruck sailor, in Sweeney Todd.  He will perform two shows. (Photo by Jim Mechalakos)

The original tale, which some historians consider an urban myth, contained many tell-tale details that modern interpretations have retained, notably an upstairs barber shop from which a rather large number of customers never emerge, and a landlady, Mrs. Lovett, operating a pie shop downstairs, with designs on the barber, and an ingenious, prescient idea for reducing, reusing and recycling said customers. Throw in lunatic asylums into which the innocent are, well, thrown, a madwoman who wanders the streets muttering and shrieking, a judge who seems unnaturally interested in his sequestered (very) young, golden-haired “ward,” and an apprentice who perhaps learns his trade all too well, and there you have it: the perfect ingredients for a musical.

Actually it was first turned into a film, several actually, beginning with a silent, then followed by a 1936 edition; a musical appeared in London in 1959, and a ballet was made in 1960. In 1973 writer Christopher Bond turned it into a play that added more backstory and psychologically-driven motivations to the set pieces. Stephen Sondheim based his 1979 musical on Bond’s play and, in turn, the 2007 Tim Burton film starring Johnny Depp was adapted from Sondheim’s musical.

Tickets for the Haldane production, available at the door, cost $15 for adults and $8 for students. Seniors are admitted free, and children under 12 are free at the two matinees. Parental guidance is suggested; very young children will likely find it frightening. As of this writing there were plans afoot to sell meat pies at the performances.

One thought on “Attend the Tale of Sweeney Todd”