A provision that calculates some city parking requirements using standards more than 50 years old is one of several issues Beacon officials are wrestling with as they anticipate increased development and, with it, traffic.

In recent months, the Beacon City Council has considered options, including meters, for freeing space on Main Street, where cars sometimes remain parked for hours, and for generating revenue for parking maintenance and Main Street improvements.

Mayor Randy Casale said Wednesday he can’t officially commit to parking meters but believes there’s a “good chance” they will be installed eventually.

Rather than dedicate police resources toward ticketing, Casale said he prefers the idea of “state-of-the-art” meters — ones which would conceivably allow drivers to park on one end of Main Street, pay a parking fee that’s electronically “attached” to the car’s license plate, and then move along Main for as many stops as needed, for the duration of the parking fee. 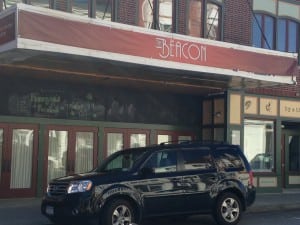 A prime spot in front of The Beacon Theatre (photo by J. Simms)

There would be several benefits, he said — stationary cars would be forced to move, freeing spaces; people would have more incentive to access Main Street on foot, decreasing congestion; and funds would be generated for maintenance and downtown streetscape improvements.

“To have a vibrant Main Street, you need to have parking spaces turning over,” Casale said, adding that meters wouldn’t be approved without giving the public ample opportunity to voice its opinion.

A discussion at a City Council workshop on Feb. 29 focused on what has become known as the “1964 provision.” While most building owners in Beacon must provide a certain number of off-street spaces based on their building’s use, the provision, adopted in the early 1970s, exempts that requirement if the building existed prior to April 1964 and has not increased “significantly” in impact. How the building is used also plays a role. The provision has been an issue during the planning board’s review of McAlpine Construction’s redevelopment of the Beacon Main Street Theater.

The term “significantly,” as defined by the zoning code, is 25 percent or more. A restaurant that existed before 1964, for instance, may have been required to provide 20 spaces. If the building still exists and would need 24 spaces under current regulations, the requirement for four more spaces would be waived because four spaces are not 25 percent more than the 20 spaces required in 1964.

In the case of the Beacon Theater, which was built in 1934, the McAlpine group is not required to provide parking beyond what was required in 1964, when the theater sat 800 people. McAlpine’s plans to introduce a 195-seat multi-purpose performance space along with 32 residential units have not been calculated as enough of a change to require additional off-street parking.

At a planning board meeting last month, however, the board asked the developers to look into restriping an area behind the theater — the section of Van Nydeck Avenue that sits between Teller Avenue (Route 52) and Tioronda Avenue — to make sure it has the maximum number of spaces. The street is not currently striped for parking.

The developers are scheduled to appear before the planning board for a continued review of their plans on Tuesday, March 8.

City Council member George Mansfield said this week that the 1964 provision can benefit a city with many historic buildings, such as Beacon. Because it offers exemption from parking requirements, it encourages the reuse — rather than abandonment — of existing buildings like the Beacon theater.

“Nothing could happen in that theater [without the provision] because no one could provide the parking that would be needed by current standards,” he said. At the same time, the provision immediately triggers a conversation about parking capacity, he said.

Parking meters would incentivize people not only to walk more but also to use less-desirable spaces such as those on streets other than Main, he said, while creating revenue from the more convenient spaces. But, he admitted, a move toward meters might not be popular.

“I haven’t made up my mind,” said Mansfield, who said he is open to arguments from both sides. “But we have to anticipate tomorrow and many years in the future. This conversation has to happen before it becomes too late.”