A group of Beacon residents have petitioned the city to rezone their properties, which sit in a zone that “links” Main Street to the riverfront, to deter a 70-unit residential development proposed for the neighborhood.

The parcels named on the petition — two on the west side of South Avenue and five on the west side of Wolcott Avenue (Route 9D) — are all within the “linkage zone” established by the city in 2013 to support businesses on the west end of Main. The seven parcels, however, as well as others directly outside of the linkage zone, also lie within the city’s Historic District and Landmark Overlay, which requires owners to receive approval from the planning board for exterior alterations.

The property owners presented their petition to the City Council last month, asking that it restore the single-family residential zoning that existed prior to the approval of the linkage rezoning in 2013. 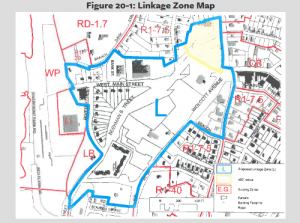 Removing the “linkage” designation, which encourages more dense residential development, would put a crimp in the plans of Unicorn Contracting Corporation, which hopes to build a 70-unit development on the lots next to the Reformed Church of Beacon on Route 9D, a few hundred yards past City Hall. The group presented its plans for the “River Highlands” development to the planning board in November.

The linkage zone was developed to increase the “vitality, attractiveness and marketability” of the section of Beacon that extends from the west end of Main to the Metro-North train station at the riverfront. Its boundaries encompass Beekman Street, West Main and a portion of Wolcott Avenue as it runs in front of City Hall to just beyond the Reformed Church. Its intent was to encourage residential development to support Main Street businesses and create a “vibrant, economically successful, walkable and environmentally sustainable connection” between Main Street and the river.

Lisa Gallina lives in the Hammond Plaza condominium development on Beekman Street, and was instrumental in having the condominium board sign the property owners’ petition. She says she supports the linkage zone in theory but believes a development as dense as the River Highlands would hurt Beacon’s unique character and is indicative of a greater problem looming for the city.

“There’s this hunger right now to move all these things in quickly,” she said. “If we green-light seven projects at once, we’re opening Beacon up to be rapidly overdeveloped and then lose its charm and lose its character. If it’s not done well, Beacon will no longer be a place that people want to come to.”

Gallina said she’s concerned that development is spreading too quickly throughout the city, not just at the riverfront and in historic zones. There are between 400 and 500 approved residential units in the city’s pipeline, with another 165 seeking approval. 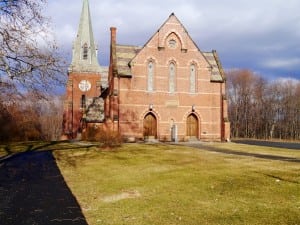 The Reformed Church of Beacon (photo by J. Simms)

Maggie Yarnis, who lives in a 19th-century home on South Avenue, fears one day walking out her front door to see a “Main Street-style” building across the street. Because she and other neighbors live just outside the linkage zone, “our complaints aren’t accepted,” she said, “but it’s going to ruin the fabric of our neighborhood.”

The residents’ petition will now be forwarded to the Planning Board for its review. A public hearing will also be held within 60 days before the City Council makes a final decision on the petition. According to City Attorney Nick Ward-Willis, any development projects impacted by a council decision to change zoning designations would have to conform.

Council member Lee Kyriacou questioned at a Feb. 29 workshop whether the intentions of the zone are compatible with the historic houses in those neighborhoods.

“As far as I can tell, this is the only place where you [might] have Main Street-style building on one side of the street and historic, single-family housing on the other,” he said. “I don’t know of any instances of that, anywhere.”

The River Highlands is not the only new development planned for Beacon’s linkage zone. While it is not part of the historic zone or named in the residents’ petition, “The View,” a 50-unit residential project, has been proposed for the wooded area on Beekman Street southwest of City Hall. The planning board has scheduled a public hearing on the proposal for March 8.