Patricia (Patty) Ewing Richter, a lifelong resident of Manhattan; Sorrento, Maine; and Garrison, passed away on the morning of March 1, 2016, just a few weeks short of her 90th birthday, at Kendal-on-Hudson in Sleepy Hollow. She passed peacefully following a brief but valiant struggle with sudden and complex health issues. She was surrounded by family, dear friends and expert professional caregivers throughout the last month of her decline. 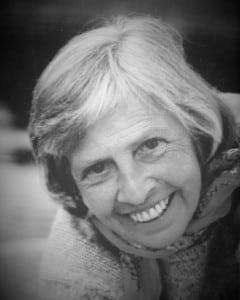 Patty was born in New York City on March 17, 1926, to William F.C. Ewing and Emily Fordyce Dodge. She was a proud New Yorker whose grandmother told her that the St Patrick’s Day Parade on Fifth Avenue was in honor of her! She loved music, and until recently was able to enjoy monthly trips to the New York Philharmonic with her lifelong friend, Edie. She was also an unwavering Yankees fan.

Patty met the love of her life, Peter, after World War II and they were married in June 1949. She is survived by her three devoted sons and their wives: Eric (Amy) and Peter (Kathy) of Garrison, and Curt (Jaana) of Helsinki, Finland. Patty is also survived by her four beloved grandchildren, Paul and Elizabeth of Garrison, and Marianna and William of Finland, and by her sisters, Fordyce Van Winkle and Jennifer Ewing, as well as many nieces, nephews and cousins.

Patty was intensely proud of her three sons and she loved each of her grandchildren unconditionally, and delighted in their unique interests and talents. Patty was also like a “second Mom” to the Roy and Perkins families, and during her summers in Sorrento, she befriended many young people who have become adult friends. Patty worked as Rep. Bill Green’s chief of staff and also as Mayor John V. Lindsay’s Commissioner for Volunteers. She began life as a Republican but later in life became a Democrat and was fiercely political.

Kendal was a place where Patty thrived. There she enjoyed the company of the many dear friends she made, and rarely missed her weekly games of Mahjong. She also attended a variety of activities, including conferences and musical events, and participated in the bell choir. She will be fondly remembered at Kendal for her sincere interest in the staff, and for her love of grilled cheese sandwiches, coffee with a lot of milk, and chocolate, particularly Hershey bars.

A memorial service is planned for May 21 at St. Philip’s Church in Garrison and also on July 23 at Church of the Redeemer in Sorrento. In lieu of flowers, the family would appreciate donations in Patty’s memory to Doctors Without Borders (P.O. Box 5030, Hagerstown, MD 21741, or donate.doctorswithoutborders.org), or the Maine Sea Coast Mission (127 West St., Bar Harbor, ME 04609, or seacoastmission.org).