To repeat is not easy, on any level in sports. In the pros, you can sign a star player to a long-term contract and that can help. In college, you spend months recruiting strong players who can give you four solid years. But in high school? The deck gets re-shuffled much quicker.

In 2015, Section One had teams from four schools reach the state’s final four in boys’ basketball, held at the Glens Falls Civic Center. But this year’s final four, which will held this weekend, is a different story. Top-ranked Mount Vernon in Class AA got bounced in the Section One finals. Woodlands, which finished ranked second in the state in Class B, got bounced in the semi-finals. The only Section One team returning to Glens Falls is Haldane in Class C.

The Blue Devils play Moravia (a school in the Finger Lakes region) in the semifinals of the Class C state tournament at the Glens Falls Civic Center at 3:15 p.m. on Friday, March 11. If Haldane wins, it will play the winner of the other semifinal between Middle Early College High in Buffalo and AuSable Valley in Clintonville, in the far northeast corner of the state. 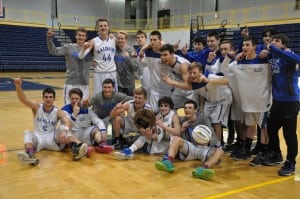 How did this happen? Who in the 10516 zip code can say they believed when practice began on Nov. 1 that the boys’ team would be going back to the final four? Who can say they believed it on Feb. 1, when the Blue Devils, at 10-8, had lost nearly half their games? The 2015 team graduated its star, Peter Hoffmann, now playing for Hamilton College, and 6-foot-7 Edmund Fitzgerald, now at Castleton in Vermont. They graduated point guard Ryan McCollum and big man Garrett Quiqley, whose injured ankle hurt the team against Lake George last year in the semi-finals. They graduated Nick Allen and Tanner Froats. That’s 80 percent of the starting line-up, representing some 40 points per game.

If you doubted this team, you’re not alone. The Blue Devils finished 11-9 in the regular season. After getting pummeled by Putnam Valley in early February by 30 points, they weren’t expected to advance beyond their second tournament game on Feb. 24 against Tuckahoe, and if they managed that, certainly not against their third opponent, which turned out to be Hamilton.

But what a team does in December and January is not a reliable measure; it’s what it does in late February and March. The 2016 Haldane team peaked at the right time.

Much credit must go to Coach Joe Virgadamo. You can look at the minute — the end of the regional finals game against Stony Brook on March 4, for instance, where Virgadamo used four team fouls to shrink the game two seconds at a time until Stony Brook was left with the ball and only 10 seconds on the clock. It was a bold move that could have backfired had Stony Brook scored. Or you can step back for a larger picture — the consistently fierce and well-orchestrated Blue Devils defense. Haldane held Stony Brook to 34 points. They held Tuckahoe scoreless for more than 10 minutes in the second half of the semi-finals. 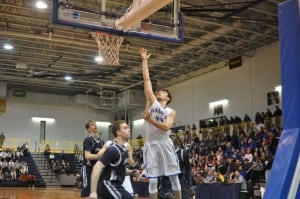 You also can’t discount the play of the team’s seniors. Will Zuvic has become a beast in the paint, with a feathery touch and a hound dog’s instinct for the ball. Everything went through Zuvic offensively against Stony Brook, and he handled it well. What happened to Tucker Beachak in the play offs? He played at the Westchester County Center like it was his driveway hoop, scoring with a mixture of threes, running jumpers and drives to the glass. There will be a long rebound, the ball shooting into the corner, several players around, and David Rotando will zip into the fray and snatch it. In the Hamilton game on Feb. 27 he gave a hard foul to prevent a lay-up, the opponent’s star player and coach both imploded, the referees called multiple technicals and the game was transformed in 30 seconds.

But this team has something else, an intangible grittiness and trust in one another. They work together as a unit. You might not see much on the stat sheet from Nick Chiera and Eric Rizzi, but they have been tough on defense and made timely buckets. Finally, Blaine Fitzgerald’s improvement over the year has been essential. Against Tuckahoe, he went three quarters of the length of the court after a steal for a lay-up. He’s also handling the defense, rebounds and short jumpers.

The Class C championship game is scheduled for 7:15 p.m. on Saturday, March 12. It’s no longer hard to believe Haldane will be there.