Most Beacon residents know the city was once two towns: Fishkill Landing on the river, and Matteawan by the mountains, which merged in 1913 to become the city of Beacon — actually, it was originally going to be called Melzingah, a word attributed to the native people of the area, until New York City newspapers ridiculed city officials for proposing such a difficult name to spell and pronounce. Residents decided to name the city after the mountain in its backyard.

Evan Pritchard, founder and director of the Center for Algonquin Culture in Rosendale and author of Native New Yorkers, Henry Hudson and the Algonquins of New York, says the stories behind the names is a saga unto itself. “For starters,” he says, “Matteawan and Fishkill kind of mean the same thing.”

Pritchard will give a free lecture sponsored by the Mt. Beacon Incline Railway Restoration Society at 6 p.m. on Saturday, March 12, at the Beacon Institute for Rivers and Estuaries entitled Halfway to Paradise: Mt. Beacon, the Highlands, and the River Indians Before 1609. The institute is located at 199 Main St.

As Pritchard explained in an interview, the area known as the city of Beacon has been a significant spot in the Hudson Valley for thousands of years. Archaeologists have uncovered tools and artifacts dating to 9000 B.C. But it was around 1000 A.D. that the region flourished, with the Munsee tribe, based on the other side of the river and part of the larger Lenape confederacy, settling in Beacon and coexisting with the nearby Wappinger tribes, much like Fishkill Landing and Matteawan existed side by side for years. 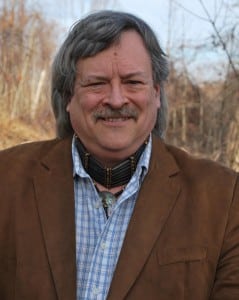 What is today Route 52 was part of a trail that extended down Tioronda Road to Madam Brett Park and Denning’s Point (which was a major crossing spot), across the Hudson and all the way to the Delaware River.

The Munsee referred to the area as Mettawan, meaning “trout stream,” in reference to the abundant creek that they fished from. But, Pritchard says, when they heard of a southern tribe by a larger creek referring to themselves as the Kitchewank, meaning “People of the Great River,” they changed the name to Matteawan, or “humble little stream,” as a way of poking fun.

When the Dutch came to the Highlands, they heard of the story of the origins of the name Matteawan and, as was typical, used it as the basis for a new Dutch name: Vis Kyl, or Fish Creek. Over time, Vis Kyl became Fishkill. So while one could argue that the name Fishkill Creek is redundant because it translates literally as “Fish Creek Creek,” Matteawan is similar, as well.

But where did Melzingah come from? Pritchard explains that it was the result of more wordplay, something he referred to as “Double Dutching.” Every time the Dutch came across an Algonquin word, he says, “they’d try to make a pun and turn it into something Dutch,” he says. “There are more than 100 examples in the area.”

Pritchard believes Melzingah has its origins in the long, slender island at the base of the waterfalls in what is today known as Madam Brett Park. The Munsee referred to the island as M’singwe (muh-sing-way). The M’singwe were the “little people” of the forest, spirits that could not be seen. The Munsee believed the island was a sacred place, and that supernatural happenings frequently took place there. When Madam Brett built her mill there, she would refer to the island as Fairy Island to honor the Munsee beliefs. 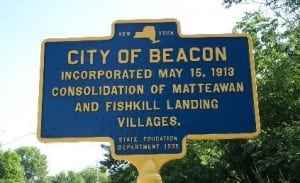 A state historical marker explaining the origins of Beacon. (waymarking.com)

The name lived on when the Dutch began to refer to the area as Melzingah, which Pritchard believes is a playful merging of M’singwe and Muhle-zinger, which is Dutch for “mill singer,” a reference to the singing sound a mill makes. It was this name that was initially chosen in 1913 for the merging of Fishkill Landing and Matteawan, and then changed to Beacon, after the mountain. Only, of course, the mountain wasn’t originally called Beacon. “It was Matteawan Mountain!” says Pritchard.

Whatever you call it, the mountain is an important part of the landscape. “There’s an Algonquin belief that there’s a connection between altitude and levels of consciousness, levels of the spirit world,” Pritchard explained. “As you move up in altitude, you’re moving closer to paradise.” The mountain also can be a dangerous place. The rocky ridge that separates Dutchess and Putnam counties was also a border for native peoples, separating the watersheds of the Matteawan and Canopus creeks; what is now called Indian Brook and Indian Falls in Cold Spring, another sacred site.

Today the ridge is known as Breakneck. While legends differ as to who was the first to break his or her neck there, the name used by native peoples — Matumpseck, or “bad rocks to climb” — suggests hikers have been injuring themselves there for thousands of years. “They knew you could break your neck on those rocks because a lot of those boulders that you have to grab onto are quite loose,” Pritchard says.

2 thoughts on “Why Do They Call it Beacon?”