The Beacon Planning Board has approved redevelopment plans for the city’s historic Main Street Theater, while two new housing projects inched closer to approval this week as well.

The theater has been a mainstay at 445 Main Street since its opening in 1934. After a public hearing last month, the planning board on Tuesday (March 8) granted approval for the redevelopment of the 800-seat theater.

Architect Aryeh Siegel said Wednesday that reconstruction of the site could begin this summer. It will include 32 apartments, many of them one bedroom, behind a renovated 195-seat performance space, which will sit on the building’s second floor, atop a first floor lobby. Small retail spaces will be incorporated as well, Siegel said.

The development is not required to provide additional parking based on a city zoning provision that provides waivers for some buildings already in existence prior to 1964.

The Beacon Main Street Theater was sold to Brendan McAlpine of McAlpine Construction last year after the previous owner, 4th Wall Productions, fell behind on mortgage payments. The McAlpine family also restored the factories on East Main into the complex known as the Roundhouse, which is considered to have been the catalyst for Beacon’s east end of Main transformation.

This time around, McAlpine drew some criticism when he abandoned 4th Wall’s plan to restore the space as a full-sized theater, instead announcing plans for the multi-purpose performance/retail space along with apartments that was approved on Tuesday.

Only one person spoke during the planning board’s public hearing Tuesday night for The View, a 50-unit project with five below-market rate apartments proposed for the wooded area on Beekman Street, southwest of City Hall.

Theresa Kraft of Beacon asked the board to consider a moratorium on new residential development, saying that projects like The View and others that fall within designated historic zones “will forever change the city of Beacon.” Citing “over-development,” Kraft made a similar request last month during a hearing for the redevelopment of the Beacon Main Street Theater. 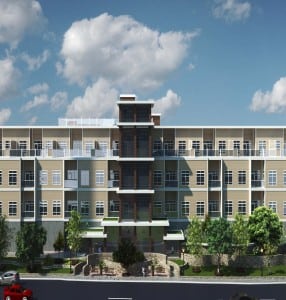 An artist’s rendition of The View, a development proposed in Beacon.

The hearing will continue next month for The View, which is envisioned as a four-story apartment complex with a rooftop patio and garden. The development, which engineer Mark Day said could be built sometime later this year if it’s approved by the planning board, would occupy the wooded area between City Hall and Beekman, adding residential units in the city’s Main Street-to-riverfront “linkage zone.”

The project will also see the construction of a public pedestrian walkway connecting Beekman Street to Route 9D, Day said. The majority of the parking for the development will be in a garage constructed underneath the building.

The planning board set a public hearing for next month on a several-story residential development proposed for 344 Main Street, next to the Beacon Natural Market, at the intersection with Eliza Street. The project, which had been set for 18 units atop a retail space, has now been adjusted to accommodate 24 units without changing the overall size of the building.

Four of the units will be below-market rate, said Day, also the engineer for this project.

A conceptual plan for the 344 Main Street project.