Vaudevillian humor and a Gypsy band invade the Depot

Ray Bokhour is onstage in the Broadway production of Chicago for about 15 minutes. His role, as Amos Hart, Roxie’s easily manipulated, duped husband, is over early in the proceedings.

Yet, during the hours that pass from his arrival at the Ambassador Theater until his post-curtain call departure, Bokhour doesn’t lounge around his dressing room. Instead, the Cold Spring resident works on his projects as an actor, writer and composer, including one that will bear fruit on March 25 and 26 at the Philipstown Depot Theatre: a farcical musical, The Glorious Death of Comrade What’s-His-Name?, to which Bokhour contributed the lyrics and in which he portrays Semyon, the comrade, described as being “lazy,” and “prickly” as well as a “tuba student” and “would-be rebel king.” 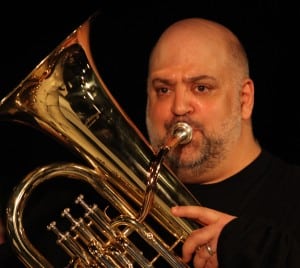 Ray Bokhour, in character: grumpy and with tuba (photo by Jeremy Daniel)

Bokhour and the rest of the cast will be accompanied by a six-piece gypsy band comprised of musicians who have played in the Chicago pit and on the first national tour of Once, where Bokhour spent a year. Comrade is based on Nicolai Erdman’s 1928 farce, The Suicide. Predictably, the production incurred the wrath of Stalin, who banned it after opening night and sent its author to Siberia for 20 years.

In the Depot production, it has been adapted, freely, by playwright David Bridel, who was mining for wit and “snowballing insanity.” The original was translated and performed at London’s National Theatre in the 1970s, starring Derek Jacobi. Following that run, it was finally produced in Russia.

“It’s kind of like The Honeymooners set in Soviet Russia,” says Bokhour. “It’s a grumbly guy, his long-suffering wife, and the weight of their reality. What happens is the terrifying, newborn, oppressive regime makes the comedy dark and vital, not just wacky or light. It takes place in a time period when things were shifting so fast that cathartic laughs were needed. Of course that’s very relevant to what’s going on today. It’s the pressure on these people which makes the comedy.” 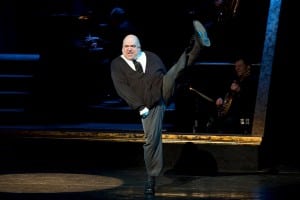 “It’s a love story, too, in that Semyon has to decide if he will love his life,” interjects Bokhour’s wife, Christine, who is the producer for the Depot performances, as well as a performer.

“The worse the surroundings, the more important that becomes,” Ray Bokhour says. “In this story it’s a repressive regime, but it could be repression in your own mind, or poverty. The story grows from a couple’s spat to his threatening to commit suicide. Word gets out and people incite him to do it as an act of protest, making him a national hero if he goes along with it. He spends the first half [of the show] half-trying on this new life and the second wriggling out of it. We have a couple of twists and turns too, uniting plotlines filled with crazy, desperate people.”

The Depot production, as developed by Bokhour, is the first musical version. He was exposed to the material during his time studying drama at London’s Central School of Speech and Drama and with composer Simon Gray through the BMI Musical Theatre Workshop, which has developed shows like Avenue Q, Next To Normal and Ragtime. With Bokhour based in New York, Gray in London and Bridel in Los Angeles, much of the collaboration was via Skype. 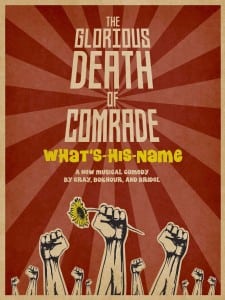 The poster for the production, designed by Zach Bokhour

The process of adapting a play into a musical took some time. “Once it becomes a musical and people stop to sing their feelings, everything changes,” Bokhour explains. “The original makes you feel deep, intellectual thoughts. It took us a year or two to explore the depths and realize the depth emerges if you don’t try to bring it out: it lives in the comedy itself, it’s not worn on the sleeve.”

Originally, the production, which was first performed last summer at the Barrington Stage in the Berkshires, retained the title of its source, but the creators found that the “life-affirming, deliciously comedic nature of this musical was undercut by that moniker” and a zany title was adopted to better reflect the vaudevillian humor.

Bokhour’s split but conjoined creative personalities harken back to his college days. He grew up in Queens, then headed to the New England Conservatory, where he studied jazz composition, while also studying English at Tufts. A friend asked him to contribute music for plays he was directing, which led to Bokhour trying his hand at acting, which led to drama school — hence three tabs (actor, writer, composer) to click on at raymondbokhour.com. “The theater was the thing that took off, but I’ve continued to write music, including orchestral stuff,” he says. 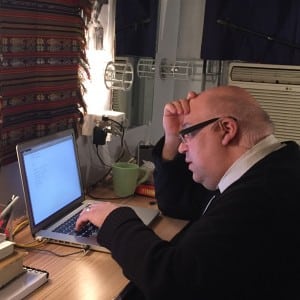 The Glorious Death of Comrade What’s-His-Name? will be performed at 8 p.m. on Friday, March 25, and Saturday, March 26, at the Depot Theatre, at Garrison’s Landing. Tickets, which cost $20 for adults and $15 for students and seniors, are available at brownpapertickets.com. Visit facebook.com/ComradeWhatsHisName for updates.