A studio visit with a Cold Spring artist

Cassandra Saulter had to retire early as a film and television makeup artist because her art was calling. Now she is immersed in turning items you’d put in your recycling bin into art and making a statement about a life for objects beyond their original incarnation. After a life’s work of painting, drawing and portraiture, she has expanded into sculpture, lighting, wall art and freestanding decorative objects using plastic bottles as her medium.

Saulter’s work is on view at Gallery 66 NY at 66 Main Street in Cold Spring until March 27.

Her transitional piece, Rose Window Revisited, a quilted wall panel, developed during a studio cleanup when she found some embroidery that she began roughly sewing into a pattern. Feeling she needed something to break up the density of the cloth, Saulter cut up a plastic water bottle. “My inspiration was to use things that were in my studio,” she says. “I was so thrilled with the results of this translucent material. Everything on it is recycled, including the frame.” 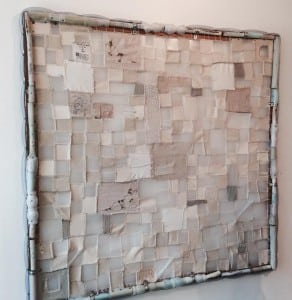 This “change painting,” as she calls it, draws together elements that can be seen evolving in her previous work, incorporating sewing, fragments, and texture. Everything she displayed during a studio visit after that is a total shift from flat surfaces to many faceted, sculptural pieces. For example, Saulter plays with light using LEDs to illuminate a string of bottle tops saved from a juice cleanse she once did with the crew on a location shoot. The result is a jewel-like strand hanging from the ceiling and trailing onto the floor.

The materials themselves have back stories. Another wall hanging that has quilting aspects uses a distinctive yellow plastic. “Someone handed me a big bag of Arm and Hammer laundry detergent bottles,” Saulter recalls. “I took up the challenge, but the color was off. I had to tame the yellow and made a painting to go behind it.”

The final artwork has a nice interplay between the natural forms that resemble leaves or floral shapes in the painting layered behind the sewn together bottle fragments held together within a frame that creates a window onto the painting. 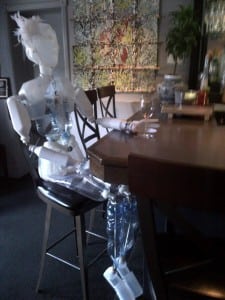 When asked for insights about her art, Saulter said, “I don’t give it a thought. I’m more tactilely and engineering involved. The meaning was that I had to make these crazy yellow bottles work. It comes out of me from a different place than thought. I’ve been doing this my whole life and have evolved to this point.”

Saulter is articulate, however, about becoming a repurposed plastic artist. After the change painting, she decided she had to make a person. Delphine, a 6-foot-tall creation that can sit with its legs crossed or pose standing, serves as the focal point for her current work; everything she displays is connected and part of Delphine’s world. Saulter, who plays the role of creator in this bottled-up universe, has given her a daughter named Darla, a man named Adam, a large dog, a pet pig, a wardrobe of clothes, jewelry and furniture. Her family history is told through a wall of family portraits. Delphine even has a heart with ventricles visible in her chest.

“Because it’s kind of odd that I jump from one thing to another and not considered very cohesive, I can say that it all belongs to Delphine and she is the poster child for repurposing creatively,” Saulter says. “She now has a family, but she also has a job.” Saulter wants Delphine to be a spokesperson for a movement about doing good work. 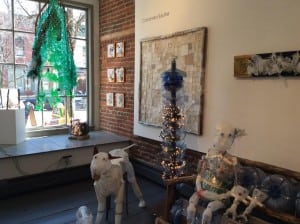 Delphine’s dog, daughter and some of her furniture at Gallery 66 NY (photo provided)

The artist describes herself as someone who was always drawn to political activism and considers this her art legacy and the perfect pairing of her conscientiousness and creativity. “To think that I was saving things from a landfill made me really happy,” she says.

Her plan is to start a recycling design center; she’s looking into grants. A warehouse of materials, a team to support all the ideas she has and someone to bring her lunch at noon — Saulter is ready for the big dream to come true.