Village election will move to November

Steve Voloto and Lynn Miller won seats on the Cold Spring Village Board in a three-way election held on Tuesday, March 15. Voloto received the most votes, with 400, followed by Miller with 383 and Barney Molloy with 281.

In a referendum held as part of the election, voters said “yes” to moving village elections from March to November by a margin of 340 to 291. 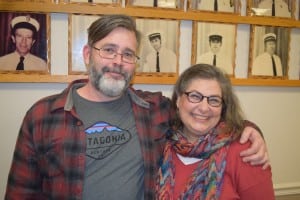 Steve Voloto and Lynn Miller just after the vote count was announced. (Photo by M. Turton)

If the referendum result is unchanged, the next village election will shift to November 2018. Next year’s election for mayor and two trustees will be held in March.

Voter turnout was moderate with 658, or 46.3 percent of 1,421 eligible voters. There were 88 write-in votes after Frank Haggerty and Charles Hustis III mounted last-minute campaigns. The BOE will tally the write-ins on March 22, along with absentee ballots. The number of write-in ballots is not large enough to change the election result.

Voloto was seeking public office for the first time, while Miller had served a partial term as trustee after being appointed in 2009 to fill a vacancy. She then ran unsuccessfully for trustee in 2010.

Molloy, who had served as chair of the village planning board, lost to Dave Merandy in last year’s mayoral election.

The election on March 15 may represent a watershed moment in Cold Spring politics. It was the first election, at least in recent memory, that none of the candidates was a lifelong village resident. Miller has lived in Cold Spring for 12 years, twice as long as Molloy and Voloto. The vote in favor of moving the village election to November might be the clearest indication of the demographic shift. Anecdotally, longtime residents appeared more passionate about maintaining March elections as a Cold Spring tradition. For many newer residents the election date seemed less about tradition and more about a potentially larger voter turnout and perceived cost savings.

Some of the conversation on election night centered on the idea that the three incumbent members of the village board had “handpicked” Voloto and Miller, the result being a village government without dissenting voices. The board will be diverse in residency, at least, with two lifelong residents in Mayor Dave Merandy and Deputy Mayor Marie Early and three relative newcomers in Fran Murphy, Voloto and Miller. It is not clear if those perspectives will lead to any wide disagreements.

4 thoughts on “Voloto and Miller Win in Cold Spring”