But makes no mention of Philipstown or tourism

Putnam County Executive Maryellen Odell presented her annual State of The County address at the Putnam County Golf Course in Mahopac on March 10, proclaiming 2016 to be the “year of business development.” A video of the address can be viewed at putnamcountyny.com/soc2016.

Notably, neither Cold Spring nor Philipstown received any specific attention in the address, even in the context of tourism, for which the western edge of the county provides most of the revenue that in the past the executive has called a key component of the county’s economic engine.

Less surprising, Odell did not mention the Putnam tourism bureau, or its director, Libby Pataki, now the subject of an investigation by the state attorney general. Pataki was present at the address but resigned the next day. 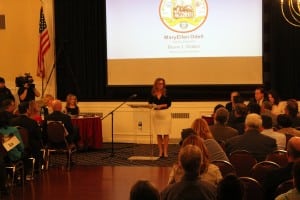 Odell presents her annual state of the county address in Mahopac on March 10 (photo provided).

Working from slides projected on a screen behind her, Odell outlined several initiatives she hoped would “drive economic development, increase the property tax base and increase sales tax revenue” in Putnam, especially in the eastern part of the country, which is home to 90 percent of the population. Among the plans she announced were:

Odell did not present any specific targets for job creation or revenue increases but did note the county has the lowest unemployment rate in the Hudson Valley. “We need to tell companies why they should call Putnam County home,” she said. She later emphasized the low crime rate and her administration’s commitment to keeping taxes as low as possible.

With a population of 100,000, Putnam is a relatively small entity, which limits its resources. It is further constrained by its reliance on sales taxes while keeping what it collects from property taxes low.

As Odell explained aspects of the county’s $151.4 million budget, which is quite similar to years past, she underscored that sales taxes pay for 36 percent of expenses, which is significantly higher than many counties in the state. Sales tax revenues go up and down based on factors such as lower gasoline prices or online shopping. To combat that uncertainty, Odell called for more diverse sales tax sources without specifying the possibilities.

Invoking “firmly conservative principles,” Odell stressed that while property taxes provide 27 percent of the budget, the county’s portion of a taxpayer’s bill is only 9.1 percent versus a statewide average of 21.5 percent. A adjustable statewide cap on a local governments’ ability to raise tax rates, this year at near zero, keeps the county from relying further on this source of revenue.

Referring to the combined impact of county, town, village and school taxes, Odell said, “We have to find ways to consolidate and work together.”

As she has in the past, Odell complained about the shortage of state and federal funding for services the county must provide by law. She emphasized that 70 percent of the budget is spent on these services, which include Medicaid, social services, mental health, pensions, community college funding and legal defense for the poor.

The remaining 30 percent of the budget includes the sheriff’s department, the jail and the district attorney as well as what Odell said were quality-of-life services such as programs for the more than 5,000 veterans in the county, local libraries and arts programs.