In what amounts to a state championship for the arts, Miranda Musso, a Haldane tenth-grader, just won it, being named as the New York winner of the high school photography division in the PTA Reflections Contest. Her photograph, “Vigilant,” was chosen from among 455 entries to receive the Award of Excellence. It now advances to the national level. Last year, one of her photos reached state-level competition.

Like much of Musso’s photographic work, “Vigilant” is shot in black and white. Musso, working with her friend Amelia Hall as the subject, shot the photo in her basement, using light sources from a string of Christmas tree lights, wrapping them around Hall, and having them held in such a way that the “lights lit her face in a different kind of way,” Musso explains.

That is also how Musso looks at the world around her. “I consider what can I do that’s different, so that no one else would be able to just hold up a camera and get the same picture,” she says. “I tend to not go out specifically looking for a photo, but I just see things that interest me. I’m always seeing things that people look past. I want to capture the moments that are missed.” 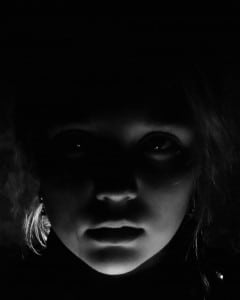 In this digital age, Musso has an affinity for shooting the old-fashioned way, using film, usually with her father’s 1990s-vintage Minolta 35mm camera. Last year she took a darkroom class at Mill Street Loft, which appealed to her because “I’m all about the process, rather than the outcome. I love to develop a photo from a roll of film, then watch the paper letting the image appear. It’s all closer to that real creative threshold I love … I am passionate about film photography but just am not there yet with digital photography.” Musso does have a yearning to learn more in Photoshop, to “have more direction for the creative visions in my brain.”

The young photographer says she particularly loves shooting in New York City, especially in Greenwich Village and Lower Manhattan. She took one of her favorite shots, a darkroom-developed, untitled image, at a Soho Café from behind her subjects. “I love nature and being outside, but I don’t love doing nature photography because I’d rather ‘be there’ in nature rather than photographing it,” she says. Oftentimes it’s just happenstance, such as a photo of her friend Alii Sharpley taken in the gazebo at the foot of Main Street. “I saw the shadows from the bars in the floor of the gazebo and saw the possibilities, saw the opportunity and took it by directing the pose,” Musso says. 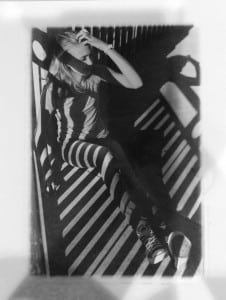 “Alli in Stripes,” by Miranda Musso

Although she enjoys photography, it’s not the be-all and end-all in terms of Musso’s passions: snowboarding is, partially because it gives her that rush of energy. “I get to be outside, in the mountains, in the winter when people normally turn inwards,” she explains, noting that she finds it an art form in its own way. “It’s so expressive; people know it as a contest, but at its core it’s so grassroots, and that core is having fun and expressing yourself … The more I get into it I realize how well I fit into the culture. There’s so much art influence there.”

After participating in a snowboard camp last summer at Mount Hood, Musso will be returning to Oregon this summer focused on photographing the action. 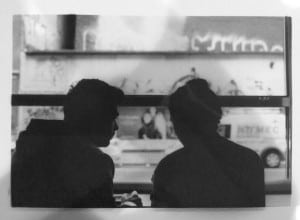 Musso says that her parents, Dani Locastro, a textile designer and Michael Musso, an environmental engineer, have “always let me foster my creativity and have let me really express myself. I can’t imagine having parents who restrict that or don’t value it. My mom is trained in art and for my dad, it’s very much ‘the earth is our home, we’re here for the ride, not to take it over.’ ”

Looking ahead to life beyond high school, Musso says she is interested in the “art and design path. Photography will be present in that. I want to make as much art as I can, and be spontaneous and productive.”