Will test mosquitoes and distribute larvicide

Hoping to prevent the spread in New York of the Zika virus, which is thought to contribute to microcephaly and other birth defects, Gov. Andrew Cuomo has initiated an “action plan” led by the state health department to increase mosquito eradication, coordinate reporting and treatment, provide emergency response when the mosquito-borne virus is discovered and educate the public about prevention.

The World Health Organization has declared the virus to be an international public health emergency and expects some four million people to be infected by the end of the year.

The Putnam County Health Department reported an infection in February in a patient who traveled to an outbreak country, one of what is now 49 known cases across the state. Dutchess and Westchester counties have not had infections reported.

State officials said they would deploy traps in 1,000 locations per month to collect 60,000 mosquitoes per month to be tested for Zika at an Albany lab. Although the Aedes aegypti mosquitos that spread the virus in South America are not found in New York, a related species called Aedes albopictus is active downstate and could potentially carry Zika, health officials said. 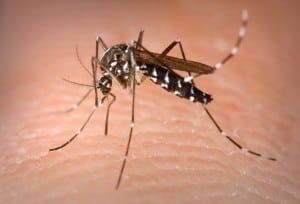 The Aedes albopictus mosquito found in the New York area

According to the federal Center for Disease Control and Prevention, the virus spreads primarily through the bite of an infected Aedes aegypti mosquito. The most common symptoms are fever, rash, joint pain and conjunctivitis (red eyes). The illness is usually mild, with symptoms lasting for several days to a week, so many people do not realize they have been infected. For that reason, the CDC estimates 80 percent of cases will go unreported.

The most recent outbreak occurred in South America, particularly in  Brazil, although Puerto Rico and the U.S. Virgin Islands have had cases. People traveling to those areas, as well as Mexico and the Caribbean, are urged to take precautions against mosquito bites.

Pregnant women are advised not to travel to countries where Zika has spread and to avoid having unprotected sex with male partners who have traveled or live in those areas. The state provides free Zika testing for pregnant women and also is sending 20,000 protection kits to healthcare providers to distribute to pregnant women with educational materials, insect repellent, condoms and larvicide tablets to treat standing water where mosquitoes breed, such as in flower pots.

The state hopes to reduce the mosquito population by encouraging residents and business owners to eliminate standing water in places such as discarded tires and clogged gutters, especially after it rains. To treat  standing water that can’t be eliminated, it is distributing 100,000 free larvicide tablets, which can be requested by calling the state’s Zika information line at 1-888-364-4723 weekdays between 9 a.m. and 5 p.m. A tablet lasts two to three months. The state also has launched a website at ny.gov/zika.