Cold Spring Mayor Dave Merandy has presented a tentative budget for 2016-17, reporting that it complies with the tax cap imposed by the State of New York “with about $400 to spare.”  The budget summary was presented at the March 22 meeting of the village board. A date for the public hearing was not scheduled but the budget must be finalized by the end of April.

The village was required to limit any increase in the tax levy to 0.12 percent for the coming year. In 2015-16 the tax levy was $1,569,561. If approved, the tentative budget will see a total of $1,571,444 raised through village taxes, a increase of just $1,883. The summary distributed at the meeting estimates that the general fund balance as of the end of the current fiscal year will be $316,201 — including $157,806 that is earmarked for the Main Street improvement project.

Two of the larger budget increases for next year include $26,000 in the cost of employee benefits and $30,000 for paving to be completed on Bank and Wall streets. The latter will be offset by CHIP funding, a New York State program that assists municipalities with street improvements. Recreation Commission spending will decrease by $6,000 next year largely because a number of projects were able to be completed this year.

As they did last week, a delegation from Spring Brook condominiums appeared at the meeting, which continued the public hearing on the proposed addition of a pay station in the municipal parking lot on Fair Street. A small number of Spring Brook residents use the municipal lot, which until now has not charged for parking.

In a letter to the board, village resident Alison Anthoine urged trustees to not initiate metered parking in the municipal lot until meters are also added on Main Street, a strategy she said she favors. “I respectfully suggest that the parking committee go back to the drawing board and consider a long term strategic plan for the use of parking meters in the village,” she wrote. Trustee Michael Bowman supported a similar approach, commenting that the residential parking permit system now being planned should be completely in place before the municipal lot is metered. 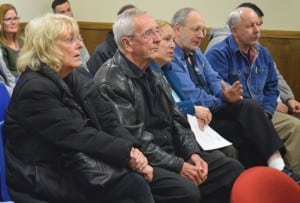 The lengthy discussion produced little information not brought forward last week. Residents repeated their request to have approximately 10 parking spaces restored on Fair Street. There was also a suggestion that Fair Street be permanently converted to one-way traffic, increasing the amount of street parking available. Currently, Fair Street is one-way on Sundays only, heading north from Main Street to Northern Avenue to accommodate those attending Our Lady of Loretto. Trustee Fran Murphy pointed out making all of Fair Street permanently one-way would require traffic entering Cold Spring from the north on Route 9D to make a long detour via Morris Avenue.

Residents also complained that three parking spaces had been lost on Northern Avenue when a new stop sign was installed at Church Street a few years ago. They advocated removing the sign and restoring the parking spaces. The Fjord Trail was also discussed, with wide agreement that its completion will only increase parking problems in that part of the village.

Other possibilities were again posed, including reconsideration of the hours during which parking will be free after the pay station is installed. Other ideas included issuing a limited number of monthly parking passes or having discounted rates for Spring Brook residents.

Trustee Cathryn Fadde, a member of the parking committee, urged residents to attend the committee’s meetings on the first Monday of each month in order to make their views known. Board members sympathized with the residents’ plight but pointed out that the municipal lot has to be managed in a way that considers the needs of the entire village.

The public hearing closed but not before Merandy pledged to work on solutions to the problems raised by residents. “We will work this out before we put meters in,” he said. “I’ll do my best to make it work.”

Toward the end of the meeting Trustee Fran Murphy commented that, contrary to some local media reports, members of the village board have not constantly been “at each other’s throats” during the past year. To back up her claim, Murphy analyzed the board’s voting record and found that in dealing with 144 motions the board had experienced only 10 negative votes.

“Ninety-three percent of the time we agreed and got things done,” she said. Murphy said she wanted to set the record straight before trustees Michael Bowman and Cathryn Fadde ended their terms. The last meeting for the two outgoing trustees will be March 29.

Bowman acknowledged that he and Deputy Mayor Marie Early haven’t always agreed politically but said that he was leaving the board “as a friend and neighbor.” Newly elected Steve Voloto and Lynn Miller will join the board in April. During the municipal parking lot discussion, Fadde offered to remain on the parking committee after her term expires.

During the public comment period Michael Armstrong expressed concern over a fence that has been constructed in front of a residence on Market Street, just north of the Chapel Restoration. Armstrong, who chairs the Chapel Restoration board, said the fence sits on village property, limiting the ability to complete a walkway called for in the village Comprehensive Plan. He also said that a retaining wall above the fence is collapsing and he called for the village to have the fence removed as soon as possible.

Merandy responded that Building Inspector Bill Bujarski is dealing with the situation, but that “as with everything, it’s going slowly.” He commented that the retaining wall is a “minimal problem” and that a new sidewalk in that location was unlikely at this time given numerous other priorities and sidewalk needs in the village.

The two went back and forth in a testy exchange with Armstrong saying that the mayor’s tone suggested he was “indifferent” to fixing the problem. Merandy said he didn’t dispute that dealing with the fence and sidewalk was a good idea but that Armstrong was “making a mountain out of a mole hill.”

Trustees approved the Cold Spring Film Society’s use of Dockside Park again this summer. The annual outdoor movie series will begin on June 25 with films offered on alternate Saturdays throughout the summer.

The Nelsonville Fish and Fur Club will hold its 28th Annual Kids Fishing Day on Sunday, May 1 at the Village of Cold Spring  lower reservoir on Fishkill Road.

One thought on “Cold Spring Has Tentative Budget”