Film shot in Newburgh will now play there

The New York Times review of Mi America (2015), which will have six screenings at the Downing Film Center in Newburgh beginning on Friday, March 25, described its fictional town of Braxton as a place with “decades of wounds.… Divided communities share a history and deal with one another, sometimes hopefully, always warily.”

In fact, a divided community plays the role of Braxton in Mi America — some would say more divided now than ever: Newburgh. The Downing screenings mark the first time the film has been shown commercially where it was shot during the summer of 2014. The location is described in a Los Angeles Times review as having a “palpable small-town-in-transition feel … with its timeless coffee shops and crumbling warehouses, that makes for an intriguing setting.” 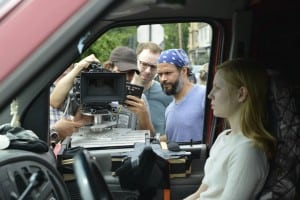 “We are so happy and proud to screen Mi America,” says Brian Burke, who runs the Downing Film Center. “It is so wonderful seeing many local venues in the film. In addition, it is great to see appearances by local citizens of the city. The film is well done, professionally made and very enjoyable.”​

In the film, five migrant laborers are beaten, shot dead and ditched near an abandoned industrial riverfront complex, where their bodies are discovered months later. It’s an obvious hate crime, an apparently not uncommon occurrence in Braxton, a gritty, waterfront city. Rolando Ramirez, a Mexican-American detective and longtime resident of the community, is assigned to the case. Was it chance or fate? His investigation forces him to question his own identity, and what it means to be a North American.

Fontaine makes a point of saying he is not a political writer. “Nor do I believe that being politically oriented in your story telling or direction will have any kind of lasting impact on your audience, especially with a subject matter that is so sensitive and timely,” he has said. “Through the interactions of the main characters, and the lives that are affected by their actions, we understand their struggle for identity, and their fight for survival. Anyone can identify with this.”

Robert Fontaine, Jr., in a scene from Mi America

At the same time, he has said, “Mi America does not point fingers at any one particular group.” Instead, it “attempts to identify where the problems lie for us, here and now. Or, at the very least, to prompt a conversation, with the intent to look for answers through self-awareness, if not collectively.”

As an actor, Fontaine has worked with a number of notable directors, including Wes Anderson, Abel Ferrara, and Eric Schaeffer. He made his directorial debut with the short film entitled Rebels (1993). That led to the financing of the full-length feature Crispy Crackers and Beans (1997), which he co-wrote, co-produced, directed and starred in.

Tickets for Mi America can be purchased at downingfilmcenter.com or at the box office at 19 Front St. For more information, call 845-561-3686.