It’s not just Cold Spring which has its first authentic focacceria, it’s the United States. So thinks Eduardo “Eddie” Lauria, who, with John Paul Scanga has opened Grano Focacceria, which features the flat, oven-baked bread that is a staple in Italy. Located at 3182 Route 9 in Philipstown Square, the restaurant, with it’s soothing décor and wood-topped tables, has been busy since opening a few weeks ago.

Focaccia is thought to be an early prototype for pizza, with some food scholars tracing it to the Etruscans. Early versions were cooked on the hearth or on a heated tile or earthenware disk. 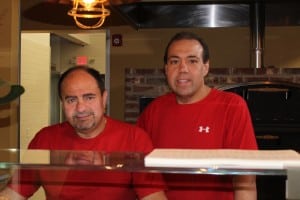 Laura and Scanga also happen to own the shopping plaza and so had planned on opening their own place for quite some time. “We saved ourselves a little spot,” Lauria said. “The project took a little while; we wanted to take our time and do it right.” Lauria has much experience in the restaurant business (he owns Fishkill’s Il Barilotto Enoteca, previously owned Aroma Osteria in Wappingers Falls and was a founder of the delivery service Eddie’s Gourmet Pizza on the Run) and had taken note of a lack of dining establishments between Fishkill and northern Westchester County.

Lauria calls himself an innovator, and introducing focaccia as the central component of a restaurant is part of it. “It’s puffy and airy, like an artisanal thin crust pan pizza,” he explained. “You can do a simple version of it, with olive oil, sea salt and rosemary, delicious, and take it from there.” Sold by the slice or whole (eight pieces in a 12” by 18” rectangle) and served on wooden slabs, the focaccia comes in eight varieties. One known as polpettina has ricotta, meatballs and fresh basil, while ortolana is topped with caramelized onions, roasted peppers and eggplant. The whole focaccia range from $18 to $25. 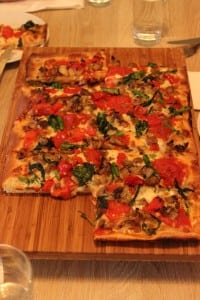 A full serving of one of the many focacce options (photo by A. Rooney)

A range of appetizers, or assaggi, get the meal started, including everything from a burrata (an Italian cheese) with arugula and grape tomatoes to salumi, with prosciutto di Parma, capicollo, mortadella and a warm focaccia. Four salads, including the lacinato, with baby Tuscan kale, dried cranberries, almonds and creamy gorgonzola, can be added to with grilled chicken or shrimp. The farcite (stuffed) offerings are an array of doughs filled with ingredients such as fennel sausage or broccoli rabe. Each is $6.

Focaccine ($9.50), which are warm, pressed sandwiches served with mixed greens, are popular at lunch. 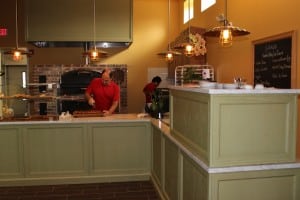 Eddie Lauria slicing a focacceria (photo by A. Rooney)

There are a small number of “piatti,” or entrées, as well, including a paillard of grilled B&E organic breast of chicken, with arugula, red onion, grape tomatoes and Parmigiano flurries.

As much as possible, Grano’s tries to use organic ingredients sourced from the Hudson Valley, Lauria said. The Kingston-based Jane’s Ice Cream provides the base for a number of desserts, including an Italian float with a shot of espresso. The wine list includes four whites and four reds and the restaurant has eight beers, including Brooklyn Lager and others from New York state, to Peroni. 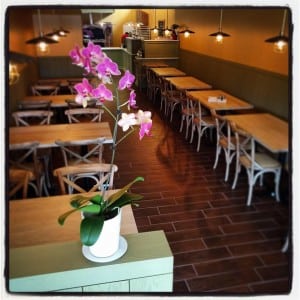 Lauria supposedly retired a year ago. He sold Aroma Osteria, and that was that. But then came this. “You know, this is a fun project,” he says with a shrug. Notably, it’s his first in Philipstown, where both he and Scanga live.  He calls the support of community members “unbelievable, in their response. We’ve had positive feedback on Facebook and in social media — it’s been amazing. It’s a new concept and you don’t know how people are going to take to it. But they have.”