Simply learning to speak the language of a certain group does not allow a person to fully delve into its culture and customs. but experiencing other cultures is something that is synonymous with learning a new language.

On Friday, March 4, an assortment of French and Spanish students from Haldane High School had the opportunity to experience different cultures and cuisines from various parts of the globe. Hosted at the beloved Taconic Outdoor Education Center, the school’s annual Immersion was once again a success.

The day started off with a few unforeseen setbacks. Due to an unexpected two-hour delay, some tweaks in the schedule were necessary. Luckily, the teachers were able to shorten a few activities to make sure that nothing was left out. 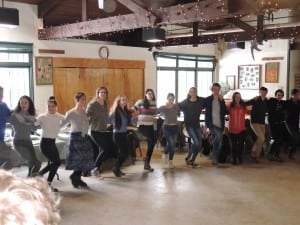 Upon arrival, the students were served a pancake breakfast, providing much-needed energy for events to come. Stomachs were full and content, unaware that in only a couple of minutes, they would be kicking and dancing around the room.

The popular French can-can dance was mastered by the students and teachers alike, courtesy of the Fred Astaire Dance Studio. Starting with the well-known kick line, the moves got increasingly complicated. After countless attempts, most were already aware of their inability to keep up with the professionals. Even so, it was a nice change of pace, giving students a glimpse into French customs.

Getting a chance to catch their breath, the French and Spanish students split up into two groups. The French students participated in a storytelling workshop with Elizabeth Rowe. They listened to a story in French and then picked one of their own to present. Many chose to act it out, adding to the authenticity of the tales.

By this time, lunch was on the horizon, and once again the Taconic staff gave it their all. In order to keep in touch with the theme of the day, the chefs prepared a buffet of international foods. Mouths watering, each student listened intently to the description of each dish. 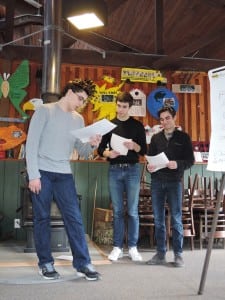 After an array of foods including ratatouille and paella, the groups split for a second time. Giovanni Leveratto talked to the Spanish students about living in Peru and moving to the U.S. He also shared an exciting episode of House Hunters International, in which he was featured as a potential buyer.

The French students listened to a cultural presentation on Haiti by Haitian radio DJ Macceau Medozile. Medozile explained the culture and history of Haiti and also discussed the importance of preserving Haitian culture.

Gathering once more, everyone witnessed breathtaking dances from both Peru and Ecuador. The Peruvian Scissor Dance, a sacred tradition in Peru, wowed the room with daring moves. It seemed as if no one could take their eyes off of the colorful dancers, performing flips with 25-centimeter shears in hand. Following this was a group of Ecuadorian folklore dancers. The flowing skirts and fast-paced moves added to the true cultural experience as they danced.

As the day wound down, a handful of students went on to participate in the “Coffee House,” a small talent show where many choose to recite poems or perform in different languages. One group even presented the fable they had written for a project in Spanish class.

As the day ended, everyone left with a new sense of cultural understanding. “Immersion was very fun and informative of both cultures,” said Teresa Figueiras, a junior who is learning both Spanish and French. As always, the Language Department constructed a day that mixed fun with education, creating the perfect balance. Expectations at Haldane are always growing, creating anticipation for what may be in store for Immersion 2017.

Dwyer is a junior at Haldane High School.