Chris and Lisa Pascarella, the proprietors of Marbled Meats in Cold Spring, had always planned to expand, but unlike most new businesses, they are doing so only a few months into their second year in operation.

“We needed kitchen space, first of all,” says Lisa, and “so many people were asking for prepared food and more options.” Because Marbled’s location on Route 9 next to Vera’s Marketplace would have required too much modification, the couple decided to look elsewhere. Their new establishment, Stock Up, opened on March 8 in Beacon, down from the George Washington statue on Teller Avenue, in what was formerly the Copper Roof deli.

Stock Up isn’t Marbled 2.0, though it does share some traits. While Marbled’s mainstay is raw meat, Stock Up focuses on the prepared version. “We know, as busy parents [their son will be three in June], that there are few healthy food options nearby,” Lisa says. “So, the idea here is to provide the meats and also add salads and low-carb proteins. 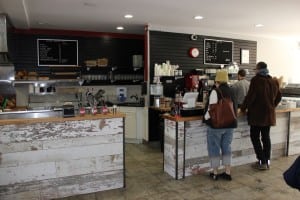 Open only a few weeks, Stock Up already has its regulars. (Photo by A. Rooney)

“Often when you go to a meat-specific place you wind up eating a lot of fried stuff and few veggies,” she adds. “Here we can do, say, a quarter-pound of brisket, and pair it with a broccoli salad. We have a rotisserie and a smoker out the back, which we’ll use for sausages, pork chops, brisket, pulled pork and smoked turkey wings, all of which you can eat here or take out.” All the deli meats, which include ham, roast beef, pastrami (which is brined for five days) and bacon are made in-house, with no fillers and no preservatives.

There are usually around nine salads, largely vegetarian, plus one with chicken and a potato/bacon dish. Stock Up also sells chicken and beef stock (their own) and offers lots of drink options, none with fructose corn syrup.  Soon they will begin carrying Go-Go Pops fruit popsicles, along with homemade granola, yogurts and parfaits. Each day there are specials, in the form of unique soups, sandwiches and a bone broth of the day.

The name Stock Up comes from what it implies: “It’s the same vision that we’ve had with Marbled, so not only can you stock up but for us it’s stocking the shelves with products so that we can serve the community all year-round,” Lisa explains.

There’s seating inside and outside, in the back, with room for about 22 diners in each section and small tables graced with bud vase flowers from Beacon’s Flora and artwork on the walls from Caitlyn Clifford, who has a studio in Brooklyn. Beer and wine are offered, standing room, at a counter.  Throughout, there is an emphasis on family-friendly — a place to congregate. The interior has been designed to accommodate a little kid-running-around time without having parents getting frayed nerves. (A changing table will soon grace the bathroom.) All payments are made when you order at the counter, so there’s no waiting around for checks. 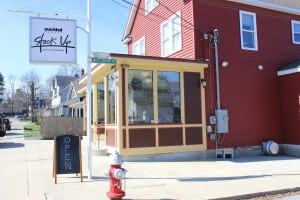 Stock Up is located at the corner of Teller Avenue and West Center St., in Beacon. (Photo by A. Rooney)

The Pascarellas say they have found the same community support for their business in Beacon that they’ve been receiving in Cold Spring. “The amount of support [in Cold Spring] has been very overwhelming, in a good way,” Lisa says, “People got behind us and are doing that here too. There’s something about the excitement of a new business popping up. We [already] have daily and weekly regulars.

“The community of the Hudson Valley wants for each other to succeed,” she continues. “Coming here to Beacon, we have carefully considered choosing things which complement the existing businesses here, like Barb’s Butchery. We wanted not to repeat, but to complement each other. And we refer a lot. We get many people staying in Beacon through Airbnb [vacation home rentals] and, for example, they’re looking for a place for breakfast. Although we do a 9 a.m. coffee service, while we’re setting up for the day, we send them to Harry’s Hot Sandwiches, which does breakfasts, or to Beacon Bread.

“We’re also working with others in the area, like Beacon Bread, More Good. We’re also working with Zero To Go to compost; we generated over 400 pounds of compost in our first weekly pick up. We’re existing together in a community, supporting each other. Chris and I are from Long Island and it was like this — there was a neighborhood deli where you could catch up with everyone. It’s not like that there anymore. It feels nice to be part of a supportive community of residents and business owners in both towns.”

Stock Up, located at 29 Teller Avenue, is open seven days a week, although Lisa says it may close one day a week in the near future, probably Wednesdays. For more information, call 845-202-7400 or visit stockupbeacon.com.