Our reporter follows the discards to their new life

It’s Thursday evening. Time to put recyclables at the road. Magically, those bottles, cans, detergent containers and cardboard boxes disappear by mid-morning. Yet few people understand the cost of that “magic” or the tax dollars that could be saved if recycling was closer to being universal.

Curbside recyclables from Cold Spring and Beacon end up at ReCommunity Recycling, a 56,000-square-foot facility east of Beacon. Its 36 plants across the country process and bale the refuse to sell to manufacturers as raw material for a variety of products.

ReCommunity’s Beacon operation employs as many as 70 people and accepts 350 to 450 tons of material a day, mainly from the mid-Hudson Valley but also from as far away as Boston.

About 30 percent of the material comes from municipalities, with the balance from private carriers such as Royal Carting. For cities, towns and villages, recycling is money well not spent because it is far less expensive than disposing of garbage. 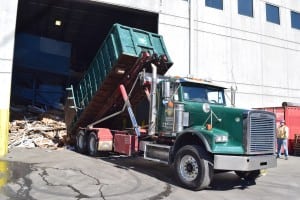 A load of cardboard arrives at the plant. (Photo by M. Turton)

In contrast, municipalities and private carriers pay nothing to deposit recyclables at ReCommunity. So each ton of recyclables saves the cost of disposing of a ton of garbage.

“Beacon brings us about 900 tons of recyclables a year; Cold Spring 250 tons and Philipstown 50 tons,” said John Formisano of ReCommunity. Philipstown’s total is substantially less, he said, because it includes only materials taken to the transfer station on Lane Gate Road and not roadside pickup handled by Royal Carting.

Formisano said recycling is often less efficient in urban communities such as Newburgh, which has 30,000 residents. “There are more apartments there,” he said, “and sometimes that means one bin for three or four units. Bins get filled and recyclable material just goes into the trash.”

Loads from cities such as Poughkeepsie, Middletown and Newburgh are also more often contaminated with unacceptable materials. “Ridgefield, Connecticut, on the other hand, is perfectly clean,” Formisano said. “There’s not an ounce of recyclables in their trash, not a piece of cardboard or junk mail. “

Where it ends up

The best recyclables from ReCommunity’s perspective are plastic bottles and containers, paper (including newspaper), cardboard and aluminum cans — materials that can be sold in bulk at a profit.

Plastics go mainly to the southern U.S. to companies such as Alcoa to become soda or water bottles, Formisano said. “Laundry detergent bottles go back to that use or into carpeting. And that vest you’re wearing probably has some PET (polyethylene terephthalate) plastic in it,” he said. 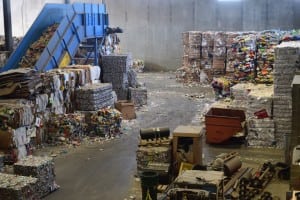 Not that long ago, most cardboard went to China, where it was made into everything from pizza boxes to greeting cards. “Five years ago China was a big buyer of all [our] exports,” Formisano said. “But now they have their own middle class,” which produces its own.

“The market goes up and down but for the most part the recycling industry has been flat for quite some time now,” added plant manager Dave Kahn. “Since 2012 there’s been a steady decline. It’s a struggle, but it’s a very strong company and it’s going to get better — the market’s going to turn around.”

The plant costs about $42 a ton to operate, while output sells for roughly $50 a ton, Formisano said. “There’s not a lot of room there,” he said. “We’re actually charging some people to tip [unload material] here now. But in the last two months we have seen the price [of the output] increase a little bit.”

Styrofoam and electronics are among the materials the plant does not accept. Glass is especially problematic because ReCommunity loses money on it.

“We’re not set up to handle glass,” Kahn said. “It would cost millions to upgrade, plus we don’t have the space.” It costs the company $30 a ton to crush the glass; it sends about 50 tons a day to mills equipped to process it. 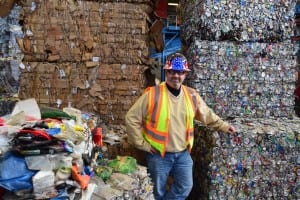 Aluminum cans are more to their liking — and the market appears to be going that way as more microbreweries switch from glass to cans. “It saves them money and holds their brand better,” Kahn said. “They can do much more graphically on cans than on bottles.” ReCommunity ships about 40 to 60 tons of aluminum a month, all from beer and soda cans.

When material arrives at the plant, material that can’t be recycled first must be separated. That job falls to 26 workers who are assisted by the facility’s 78 conveyors. The plant can process 25 tons of material per hour.

Kahn and Formisano said employees come across their fair share of surprises — from a deer carcass and a dead boa constrictor to cinder blocks, scrap metal, toys and bowling balls. And cash. Formisano thinks money sometimes gets “recycled” when family members fail to check closely while cleaning out the house of a dead relative. “Sometimes it’s $20 or even $100 left between the pages of a book,” he said. One trash bag contained $5,000. 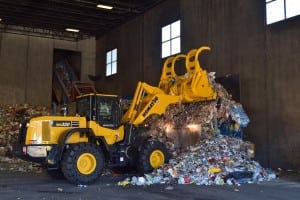 Material is processed at a rate of 25 tons per hour (Photo by M. Turton)

There are dangers. Hypodermic needles are sometimes found inside tin cans. The protective gloves worn by line workers cost as much as $40 a pair — one of the many costs of recycling that Kahn said the public never imagines. Odd and abrasive objects that make it onto conveyors also increase the cost of maintaining equipment that is already expensive to operate. “We just bought a new loader that cost $270,000,” Kahn said. “It takes a lot of recyclables to pay that off.”

Snow by the ton

Even snow eats into profits. “We’re paying for weight that’s not there,” Formisano said. Snow is sometimes measured in tons in a given load. “We have to monitor that carefully and deduct it from the load weight.”

When paper and cardboard arrives wet, “we get nailed by the paper mills,” Formisano said. Inspectors come to the plant several times a week and probe baled materials to assess moisture. “We’re not allowed anything over 12 percent moisture. We’re downgraded if we do,” and downgrading means less revenue. 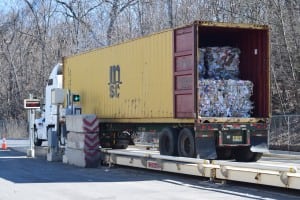 Bales are loaded into a truck to be delivered to manufacturing customers (photo by M. Turton)

Generally, however, Kahn said they are happy with the material that arrives at the plant. “We get a pretty clean mix here,” he said. “We’re strict on incoming material; we scrutinize it and we educate our customers.” Eight or nine percent of what is delivered to the plant is trash and not suitable for recycling. Badly contaminated loads are documented and fines can be levied against the hauler or municipality.

Kahn’s advice to recyclers is simple. “Keep your stream of recyclables clean and dry – and stay away from glass.”

Part of the culture

Sarah Womer is the founder of Zero to Go, a waste management company based in Beacon that focuses on composting and recycling. Her enterprise provides “zero waste” event services throughout the Hudson Valley.

“Waste is a complicated issue, and we face many obstacles,” she said. “A lack of education starts in our schools when there aren’t robust recycling programs in cafeterias and classrooms. Every gas station, laundromat, and eatery should have recycle bins.”

Womer said that in three years, Zero to Go has kept more than 50 tons of waste from some 40 events from going into landfills through composting and recycling. “We need recycling to be part of our culture,” she said.

2 thoughts on “Where Your Recycling Goes”