The New York high school outdoor long-jump record of 25 feet and 3½ inches, set in 1964, is owned by Bob Beamon, then a 16-year-old from Jamaica High School in Queens. Four years later, Beamon set a world record with a jump of 29 feet, 2½ inches — decimating the previous mark by nearly 2 feet — en route to winning a gold medal in the Summer Olympics in Mexico City.

Not a bad resume. But Beamon’s high school mark, which Beacon High School track coach Jim Henry calls the “oldest and most venerated” track record in New York, may not last much longer.

Beacon’s Rayvon Grey, a 6-foot-2 senior, looks to cap off his once-in-a-generation high school career by adding Beamon’s record to a list of accomplishments that includes a national championship for the indoor long jump — the longest by a high school athlete in 27 years.

While Grey’s U.S.-best indoor jump of 26 feet, ¼ inch is nine inches farther than Beamon’s outdoor record, the outdoor leap may be more challenging because of the wind and other unpredictable elements. Not that there’s anything easy about jumping 26 feet indoors. 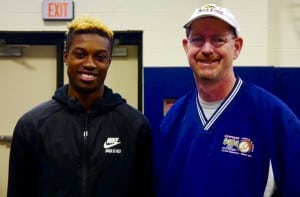 Grey, 18, says he almost quit track as a freshman because he doubted his ability. Luckily, Henry recalls, he was talked out of that quickly. “At first I didn’t like it at all,” Grey said. “Who wants to run all the time? I thought it was boring.”

Perhaps grudgingly, he stuck with track and it paid off. Coach Henry says he first saw greatness in Grey during his sophomore year, when Grey recorded a 22-foot, 11½ long jump — second best in the state that year.

“That was a bit of a surprise, and also a breakthrough,” Henry says. “He was exceeding expectations at that point.”

Last winter, in addition to his national championship, Grey placed first in New York with a 49-foot, 6½ inch triple jump (in which the athlete performs a hop and skip before the jump) and was selected as the state indoor male athlete of the year by fans voting at MileSplit NY, a site devoted to scholastic track and field.

Beacon High has had 10 track and field individual state champions since 1983, but Grey is the school’s lone national champion. He’s blown past U.S. Olympic legend Carl Lewis’s best high-school jump by six inches. This fall, he’ll head south to Louisiana State University, one of the top two jumping schools in the country, on a full athletic scholarship. 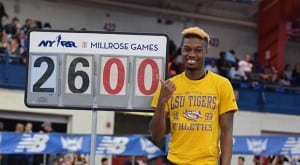 Grey after his 26-foot leap at the NYRR Millrose Games on Feb. 20 (Photo courtesy ny.milesplit.com)

But as you talk to people about Rayvon Grey, it’s quickly evident that his character is as impressive as his ability to leap city blocks in a single bound.

Beacon City Board of Education President Melissa Thompson tells a story about watching Grey during the meet when he made his championship jump. He was checking in for the 300-meter dash when the public address announcer called out the record-setting jump.

“He was, at that moment, the national champion,” Thompson said, “and he just went about his business. He wasn’t high-fiving anyone, he was just continuing on with his day. And then he went on to win his heat of the 300.

“He’s always looking for what the team has to do to win.”

Grey’s teammates are enthusiastic in their praise for him as well. Terrel Davis, a senior who has received scholarship offers from SUNY-Buffalo and the University of Hartford, says the two feed off and learn from each other.

“It’s been really cool to be able to observe him,” Davis said. “We push each other all the time, and it’s helped us both.” 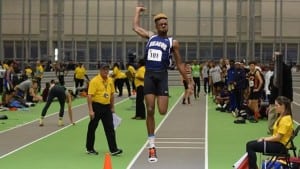 Says Coach Henry: “Rayvon has the single-best attitude you can ask for in an athlete. After each performance, he wants to know two things: ‘How was that?’ and ‘What can I improve for the next time?’ He wanted to know this when he was brand new to jumping and he still wants to know this as the best jumper in the country.”

Henry says he anticipates the Penn Relays in Philadelphia in late April will be Grey’s first chance to best Beamon’s enduring high school record. For a record-breaking leap to count, Henry says, it must be made at a meet that features a wind gauge and the tailwind must be two meters per second or less.

While that’s a tall order even for someone with Grey’s credentials, when asked about it, he grins, looks down for a moment, his  tone full of confidence yet free of conceit, and says quietly: “I’ve got it in me.”