Fantasy will lift off at Beacon High

What is Peter Pan without the flying?

That was the challenge facing Anthony Scarrone, director of Beacon High School’s spring musical version of the Sir James Barrie classic. The students already had limited rehearsal time and Scarrone, student assistant director Henry Wyand, the actors, crew and creative contributors, along with parent volunteers, had an even tighter than usual deadline because of all that had to be done prior to “the flying.”

Flying By Foy, the consultants handling the rigging and training, arrived on Easter Sunday, five days prior to opening night, and the apparatus was in place by Monday, with students assisting and learning about rigging, as they have acquired knowledge about all aspects of theater-making during this process. Alumni and adult volunteers will be “flying” the student actors.  Each flying student needs one dedicated assistant, with the exception of Peter (Rhiannon Parsaca), who needs two, as the character moves horizontally and vertically. The flying director spent three days setting up rigging, measuring harnesses and providing safety instructions. 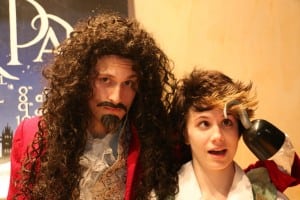 Parsaca, after her initial forays into the air, said it was “a lot like floating. I felt weightless and it was a fantastic feeling! I wasn’t scared because I have complete trust in our flying team, and seeing the entire auditorium from so high up was pretty cool. Being a relatively short person, it’s a lot of fun to be that high up.”

On a visit during what was ostensibly a vacation week, the backstage of the theater was humming with set building (under the supervision of Randy Caruso), prop-making and the construction of a dramatically high tree, which, it is promised, will play a pivotal role. Paintings on canvas, done in a Victorian nursery style by Lori Christie, were draped in a pile, ready to be hung on a set designed with openings artfully placed on beds for some surprise action in and around.

In an amphitheater-like classroom, student and choreographer Emily Kidd was running a rehearsal of a dance number in which she also appears as Tiger Lily. The students running the costume department had taken over a part of the library, where racks of their creations (student-designed and fabricated, including dyeing and stenciling) showed exactly whom they were meant for, character-wise. Those for the Lost Boys, in particular, looked not only theatrical but runway-ready. 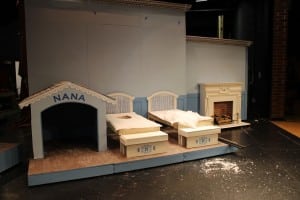 The set of ”Peter Pan” under construction. Students worked on the design under the guidance of parent mentors. (Photo by A. Rooney)

The Beacon Players, which presents two shows a year at the high school under Scarrone’s direction, aims to bring the students into every aspect of “putting on a play.” From marketing (Sierra Caban and Michael Bonnano in charge) to technical and creative components, the students lead the way. (In fact, Scarrone says, many wind up pursuing technical theater in college.) For instance, the marketing included setting up and promoting an Easter egg hunt with free tickets inserted into a few of the 600 eggs. The team also helped coordinate an afternoon event at Howland Library at which cast members previewed a scene and sang songs from the production and assisted with craft-making.

The prop crew was in charge of tracking down the hundreds of props.  Stacked on tables near the stage, there were so many it resembled a large yard sale.

All told, says Scarrone, “On any given night you come in here and it’s like Andy Hardy putting on a show.”

The students expressed great enthusiasm for making Peter Pan their spring musical. Initially, Mary Poppins was chosen, but Scarrone says he detected a less-than-ecstatic response. “Realistically, I do choose shows with specific talent in mind.” He reconsidered and offered ideas. Peter Pan was the favorite. (Scarrone later discovered that, handily, it ties in with the New York State third-grade Common Core curriculum — just weeks from now students all over the state will be comparing the Classic Starts edition of Peter Pan and excerpts from the script of the 1910 play.) 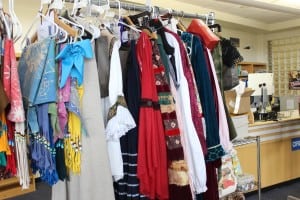 Costumes, largely designed by students, fill a rehearsal rack. (Photo by A. Rooney)

Scarrone says most of the students were more familiar with the 1950s televised version, with Mary Martin as Peter — than later iterations, such as  Finding Neverland. In this version, some of the language relating to Native Americans has been altered, for instance, changing “redskin” to “warrior.”

Freshman Alexander Ullian will bring his swagger as Captain Hook, and last year’s lead in Pippin, Leah Siegel, has been transformed into demure but feisty Wendy. The role of Peter will be played, in longstanding tradition, by a girl, junior Rhiannon Parsaca. In casting her, Scarrone said he was looking for “a combination of youth, joy, melancholy and just a touch of sadness, plus physical endurance.”

For Parsaca, the role is meaningful. “I have loved Peter Pan since I was very little,” she says. “I was even Peter Pan for Halloween when I was three! I used to stay up at night and wait for him to knock at my window and take me away to Neverland with him.

“It’s pretty cool to see that fantasy of going to Neverland come true every time I walk into the theater. To embody this role and to see children’s faces light up when I wave or smile at them brings me so much joy and excitement, it’s a dream come true. This story is so timeless and hits the heart of everyone, no matter what age because it makes you feel young and you get to escape reality and go someplace full of adventure with no responsibilities. Someplace where you can always have fun.” 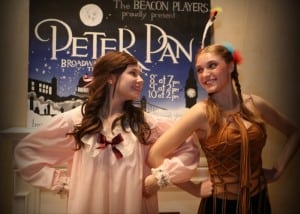 Scarrone, who has led Beacon High’s theater program for four years after spending more than 20 at John Jay High School, says his goal is “to bring more kids into this incredible activity. Our organization is not only for the kids who want to pursue professional theater, it’s for everyone — no one is turned away. It’s a place to make new friends or be the football player who also dances. It’s for the kid who maybe doesn’t fit into other groups and the kids that want to be the ushers as well as the stars.”

Peter Pan will be presented at 7 p.m. on Friday, April 8, and at 2 p.m. on Saturday and Sunday, April 9 and 10, at the high school’s Seeger Theater, 101 Matteawan Road. Tickets are $12 for adults and $5 for students and seniors and can be reserved through beaconplayers.com. If any remain, they will be sold at the door.

A free post-performance meet-and-greet for Beacon City School District third-graders will be held immediately after the Saturday, April 9, performance. Advance registration is required by emailing the name of the child and his or her teacher to [email protected]