In conjunction with the installation of Robert Irwin’s Excursus: Homage to the Square3, Dia:Beacon will host a symposium on Saturday, April 9, that brings together voices from a range of disciplines to consider Irwin’s work over the past six decades, focusing on how it shapes space and perception.

“What is so unique [about Excursus] is that there is no beginning, middle, or end,” said curator Yasmil Raymond. “Audiences can enter the work from a variety of entry points.” 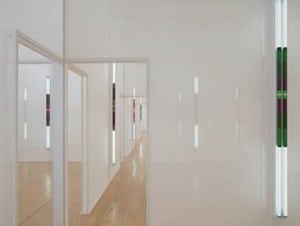 Excursus originally opened at Dia’s former space in New York in April 1998 with the title Prologue: x183. It consisted of 18 interconnected rooms set apart by transparent scrims. The second, retitled version was acquired by Dia in 2000. It will be on display through May 2017 at the Beacon museum, where Irwin “site-conditioned” the work, meaning, he says, “the sculptural response draws all its cues (reasons for being) from its surroundings.”

Admission to the symposium, which will be held from 11:30 a.m. to 5 p.m., is $15 ($13 for students and seniors; $8 for Dia members). The fee includes museum admission. Dia:Beacon is located at 3 Beekman St., For more information, visit diaart.org/irwin.