The ones pollinators love, but deer hate

Michael Hagen is the curator of the rock garden and native plant garden at the New York Botanical Garden in the Bronx and before that was a horticulturist at Stonecrop Garden in Philipstown. He spent some time reviewing his top native plants for me. This list covers plants that like sunny areas. In an upcoming column, I’ll cover his recommendations for shady areas. 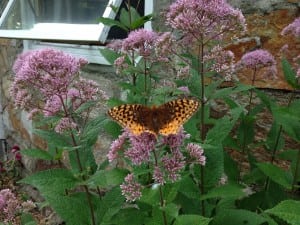 Of the list below, Hagen said: “I’ll stick with plants that I grow and know and recommend. What I tried to do was come up with 10 plants that would fit together in your garden. They are resistant to deer and really outstanding, garden-worthy plants that have good flowers, great foliage, and are reliably perennial and relatively problem-free.”

Milkweeds are a great addition to any garden. There are other milkweeds but they are a little harder to get hold of and a little bit fussier about how they grow; these two are the easiest and are both outstanding plants. They’re very long blooming, attract native pollinators, have attractive seed pods after blooming and really combine well with other native plants and garden plants. If you don’t like pink and prefer orange flowers try the butterfly weed.  It likes drier conditions.

Our native Amsonia can be kind of a large plant but there is a short variety called Short Stack that is exactly the same but only about two feet tall. It blooms at a useful time at the end of May when the spring bulbs are finished and summer flowering plants aren’t ready. If you’re not committed to plants that are native to New York, there are some American natives from the prairie states like Amsonia hubrichtii or Arkansas bluestar that have feathery foliage. It’s very long-lived, tough growing, has nice flowers and good fall color.

This plant can be quite ephemeral, but it’s just gorgeous and has a relatively long season of bloom. If you don’t deadhead it, it will establish itself where it’s happy. You can take the seed heads off and shake them where you want it to grow. It’s a trouble-free plant with a lot of bang for the buck and it quietly disappears in the heat of the summer.

The big blue one that we have is a native. There are two cultivars, Carolina Moonlight is a creamy yellow and Purple Smoke is dusky purple. The only caveat is that Baptisias have a deep taproot so once you’ve planted them, they’re hard to move around. They flower relatively early but then have these black, bladder-like seedpods that rattle and are attractive. If you don’t like that, you can shear them back and get nice foliage in the summer.

They’re classic native plants for this area and you can take your pick of the cultivars in whatever size you want. Gateway is about five feet tall; Baby Joe is about two feet tall. They can easily reach 10 feet tall. If you want the straight species, cut it back when it’s about two feet tall to keep it smaller. It will grow in regular garden soil or wet areas. If you don’t want them to seed around, deadhead them. They’re nice strong plants for the border and great for pollinators.

Any of the Pycanthemums are spectacular. They are supposedly a little aggressive in regular garden beds but given how attractive they are, I don’t care. They are a very good addition to meadow combinations and cover a lot of ground well. Pollinators love their flowers, too.

Goldenrods get a bad rap from Solidago canadensis, which is quite weedy. Whatever size you want or conditions you have, there is a goldenrod out there. It’s hard to imagine a native plant garden without them. They get an unfair rap that they are responsible for hay fever but it’s ragweed, which blooms at the same time and is the same color that causes hay fever. They don’t have any windborne pollen whatsoever.

These can be somewhat tricky. If you were going to pick one, the best one would probably be Raydon’s Favorite or October Skies — both are a wonderful sky-blue color and relatively short for asters at about three feet.  They produce mounding billows of blue that combine with late-season grasses and Solidagos; they’re just good performers in the garden.

This is an outstanding plant that will take sun or partial shade. With yellow flowers, it will bloom at the same time as the Amsonia, which is a nice combination of the yellow and blue together. It’s also a larval host for the Black Swallowtail. It seeds around a little bit but it’s not aggressive. Should be more widely grown, I think.

Here’s a bonus grass recommendation. You can pick from many cultivars, depending on what size you want. There are husky ones which can be a replacement for Chinese feather grass or you can get open vase-like ones that combine well in the border and have a much more open shape. A little bit goes a long way.