Miller and Voloto sworn in as trustees

Lynn Miller and Steve Voloto were sworn into office on Monday, April 4, after winning seats on the Cold Spring Village Board in the March 15 election. Miller’s son Jack held the Bible as Judge Anthony Costello administered the oath of office in a brief ceremony at Village Hall. Voloto’s three-year-old son Sam stood with his father as he took the oath. 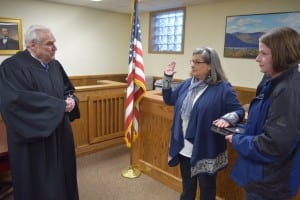 The two new trustees attended the annual reorganization meeting the following evening, their first as trustees. The session lasted less than 20 minutes but resulted in unanimous approval of the membership and chairs of numerous village committees, along with other annual appointments. While trustees receive a modest salary, the members of village committees are volunteers. 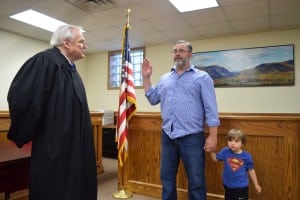 Steve Voloto is sworn into office, assisted by his son, Sam, age 3 (photo by M. Turton)

The vast majority of approvals were reappointments. Newcomers include Ezra Clementson, who was appointed to the planning board, and John Merante, appointed to the recreation commission. Cathryn Fadde, who did not seek re-election to the board, was reappointed to the parking committee and the Independence Day committee. The Zoning Board of Appeals continues to have one vacant seat.

For a complete list of area office holders and committee members, see highlandscurrent.com/local-officials.