Philipstown now has a full-time taxi service. Carmel Taxi and Car Service, owned and operated by the husband-and-wife team of Fausto Quezada and Ruth Ayala-Quezada, has added service on the western side of the county. Village Taxi opened on March 21 and its cars are routinely parked near the pedestrian tunnel at the foot of upper Main Street.

The couple decided to expand after an increase in calls last year from people wanting to get to Cold Spring from Westchester County or needing transportation from the Metro-North stations in Cold Spring and Garrison to attractions such as the Hudson Valley Shakespeare Festival and Fahnestock State Park. Ayala-Quezada said that while many visitors stay in bed and breakfasts, others need rides to hotels in Fishkill.

A network of taxis

Village Taxi has a sedan and a passenger van serving Cold Spring as well as a large SUV for airport runs. The company also operates a fleet of 20 vehicles in the Carmel-Mahopac corridor. Ayala-Quezada said she plans to add more taxis in Cold Spring once the tourist season is in full swing.

“My goal is to network everything,” she said. During busy periods, taxis from Carmel or Mahopac will assist around Cold Spring, and vice versa. A computerized, central dispatch coordinates the taxis, all of which accept credit card payment, are smoke-free and radio and tablet- equipped. When customers call for a cab they receive a text message as the vehicle approaches the pickup point. 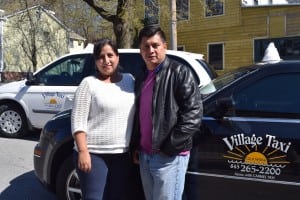 Trips within Cold Spring cost a flat fee of $5 while excursions beyond the village are based on mileage. Drivers haven’t had many fares within Cold Spring yet but Ayala-Quezada believes that will change once residents realize the service is available. She estimated fares to a number of common destinations including Breakneck ($7), Manitoga ($16), Beacon ($20) and Fahnestock State Park ($22). A typical fare of $20 would cover up to four passengers when the sedan is used. That increases to $25 for a group of up to six passengers using the van.

Trips to JFK Airport begin at $155 with a surcharge of $10 for the van and $30 for the SUV. “The SUV can also take up to six passengers but is more spacious and has more room for luggage,” she explained.

In late 2015, the Cold Spring Village Board supported a proposal to have Putnam County regulate taxi services, which remains a work in progress. Ayala-Quezada, who serves on the board of the Putnam Country Chamber of Commerce and is also a member of the Putnam County Transportation Advisory Committee, said some communities, including Brewster and Southeast, have resisted oversight.

Carmel Taxi and Village Taxi operate under a license from the Westchester Taxi and Limousine Commission (TLC), which requires fingerprinting, background checks and drug testing for all drivers. That scrutiny can be a sticking point for some people interested in working for the company. Ayala-Quezada said a recent call underlined part of the challenge. When she told him his wages would have to be “on the books,” he said he wasn’t interested.

Ayala-Quezada got into the taxi business on the ground floor. “My dad owned Ernie’s Taxi in Mt. Kisco from 1988 to 2001,” she said. “I started working for him as a dispatcher when I was 13 years old. To tell you the truth, I didn’t think I’d end up in this business.” 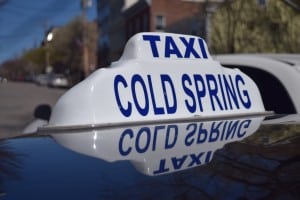 Now, with 27 years experience, she sees the upside. “It is not routine; it’s different every day — new people, new scenarios,” she said. “I like the hustle-bustle of moving people and taxis here and there. And I have a good team of drivers who know how we work.”

Taxis are available in Cold Spring or close by from 6 a.m. to 6 p.m. Monday through Thursday. Reservations can be made for trips after 6 p.m. On Friday and Saturday coverage is from 6 a.m. to 2 a.m. One of Village Taxi’s drivers is a Cold Spring resident who is on call for late-night fares. As the tourist season approaches, Ayala-Quezada plans to add Sunday stand-by service. Until then, residents can get a cab on Sunday with a reservation.