There’s a fairy tale-like cottage down a wooded country road, with a welcome sign lettered with branches placed on bark, nestled between stones and flowers. Peer in to the perfectly named White Forest Pottery and you will spy a busy woman tending to many creative pursuits.

Nancy Bauch, proprietress and creator of the pottery, sculpture (most pieces qualify as both) and homewares that line the shelves and overflow from the tables to the floors has too many ideas to be contained inside. They spill over to the house next door and, beyond that, to the woods. 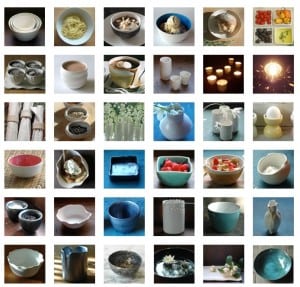 In constructing her multi-textured world of bowls, bells, wave sculptures, bud vases, candle holders, egg, nut and pudding cups, Bauch collects natural elements and “transforms these elements into new objects that dramatize and honor their beautiful qualities,” she says, building most pieces with clay or waxed linen coils, layer by layer, in a slow process that allows her to contemplate the form she is building on. That makes each piece “an experiment that leads to the next experiment.”

Bauch incorporates other elements — twine, sponge, leaves — into her designs. For her larger, sculptural pieces, she uses a slab roller, making strips of porcelain, which she adds, one to the next, before building it and “watching how it flops,” and perhaps pushing it for more volume. At times a resulting crevice “makes for a beautiful line” — things can cleave, as they do, and become both “serene and entangled.” 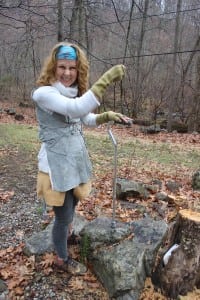 Despite a broken foot Nancy Bauch has continued her daily walks, which often provide inspiration for her designs. (Photo by A. Rooney)

Bauch calls her work her meditation and, as many an artist before her, immerses herself in nature as a means of stimulation and reflection. She intentionally mimics nature’s imperfections, drawn to the Japanese wabi-sabi approach of appreciating the beauty of things turning out as they turn out rather than honing them in a quest for symmetry.

The genesis for Bauch’s art was an uncle who was an artist and sculptor who traveled the world and brought back “things you don’t see at Walmart,” such as tin pins from Argentina, she says. She loved art class in school, “though I never could draw, still can’t, but could do all the three-dimensional stuff.” Told by a teacher that her strongest aspect was her experimentation, Bauch enrolled at Michigan State University in what proved to be a conceptual art program, which wasn’t clicking with her. Seated next to an interior designer on a plane, she discovered a new field where she could work on developing skills in making floor plans, lighting design and facets of architecture. 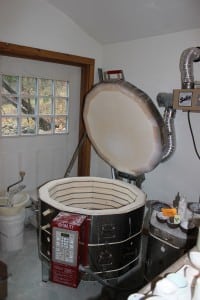 Bauch’s kiln (photo by A. Rooney)

In her early professional life she specialized in hotel design work, then environmental signage, eventually moving to graphic and packaging design. She worked as an art director at Clement Mok Design in San Francisco, then at Nike in Portland before heading to New York, where she had her own design firm for most of the 1990s.

It was there that Bauch happened upon a Monday night pottery class at Greenwich House Pottery. “The more I devoted myself to studying, the better my pottery got,” she says.

In 1998 Bauch moved to Garrison, and, two years later, after making pottery for friends and neighbors, devoted herself to her art full-time in her picturesque studio, acquiring a kiln and beginning a process of experimentation, her mind making connections between objects, methods, textures and ideas, often relating to what can be created from remnants that someone else might throw away. For instance, it occurred to her that she could take the excess which emerges from filling molds with liquids and turn that into napkin rings. 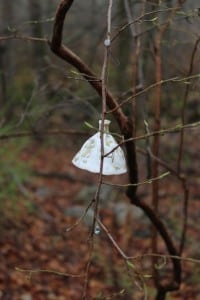 Stroll in the woods near White Forest Pottery and you may well find bells and jewels placed here and there.(Photo by A. Rooney)

Bauch cites her stay at Haystack Mountain School of Crafts in Deer Isle, Maine, as crucial. “When you take a workshop at Haystack, you are able to work in the studio day and night, you have time to experiment and discover, and be a part of an intensive and supportive community,” she says.

Connections brought Bauch’s work to the attention of the art director at Martha Stewart Living, which soon featured her work. Another spread in Domino followed. Now White Forest Pottery is sold mostly online at whiteforestpottery.com, with studio sales a couple of times a year. Gift items, particularly wedding gifts, are the mainstay.