While Beacon has served as a location for a few Hollywood films such as Nobody’s Fool (1994), it’s been notably absent from television screens during its current renaissance. That’s soon to change, as the adventure travel series Fireball Run will be filming part of its 10th season in the city and Dutchess County in late September.

A mix between The Amazing Race, National Treasure and Cannonball Run, the show follows 40 teams over the course of eight days as they compete in a 2,000-mile trivia contest in which historic cars act as the game pieces and America is the board. The teams consist of celebrities, CEOs and history buffs who follow clues to each destination or locate local artifacts. 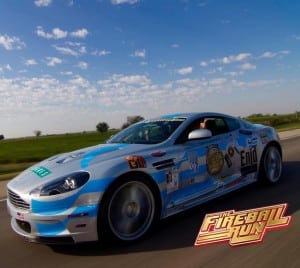 There are a few qualities that set Fireball Run apart from shows such as The Amazing Race, however. The producers refer to it as “factual entertainment,” as even the most naïve fan now knows that most so-called “reality” TV shows are staged and scripted. Fireball Run says its shows are unscripted and unrehearsed.

Second, the show focuses on the destinations as much as the players. “It’s really more of a travel show,” said Mary Kay Vrba, president and CEO of Dutchess Tourism, who with her staff successfully lobbied the producers to bring the program here. While Fireball Run is available in the U.S. only through streaming at fireballrun.com, it’s televised throughout Europe, Africa, Latin America and India, which will introduce Beacon to a global audience, noted Beacon Mayor Randy Casale. “We’ve certainly got lots of hidden treasures here they can incorporate into the show,” he said.

Third, there’s no cash prize for the winners. Instead, the teams compete for bragging rights and to help a worthy cause: The Race To Recover America’s Missing Children. Throughout the series, contestants hand out and put up fliers highlighting a missing child. When the teams come to Dutchess County, they’ll be handing out fliers about Tiffany Dixon, who was 12 when she went missing in Brooklyn in 1991. So far, the show has aided in the recovery of 47 children. 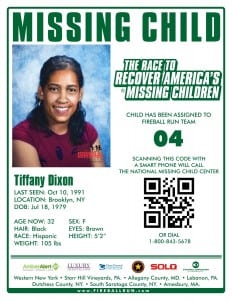 The teams will be distributing flyers with a photo of Tiffany Dixon.

Since the series is known for diving deep into under-discovered places and highlighting obscure facets of history, the 40 teams have already been made aware of the general areas of the country they’ll be visiting, which also will include Saratoga County and parts of Pennsylvania and Maryland. And Vrba has been allowed to reveal that some teams will be in Beacon on Wednesday, Sept. 28.

Everything else is top secret.

“We can’t give out any hints!,” she said. “The teams are already doing their research on the area.”

Main Street will be closed for part of that Wednesday, said Vrba, who is encouraging Beaconites to gather to welcome the teams. “It’ll be filmed, so we’d love to have a warm welcome for the teams as they come in, have people cheering,” she said. “We’ll be rolling out the red carpet, we’ll have entertainment, and you’ll be able to meet some of the teams.”

The 10th season will be filmed from September 23 to October 1, and it will take about six months to edit the footage into 26 half-hour episodes. In the meantime, many of the week’s events will be streamed live at fireballrun.com, and viewers can track the GPS signals of the teams there. The site also includes video archives of the past nine seasons.