Marine zookeeper dives into details of his job

It’s easy to romanticize Mark Hall’s job. He’s a marine mammal specialist who has counted the New York Aquarium, Central Park Zoo and, currently, the Queens Zoo/Wildlife Conservation Society as employers. Hall spends most of his working life with pinnipeds (seals, sea lions and walruses) and other creatures who are both mammal and marine. When he’s done for the day, Hall returns home to terra firma in Nelsonville, where he lives with his young family.

What is a marine mammal, exactly?

At an April 2 presentation at the Howland Library in Beacon sponsored by the Putnam Highlands Audubon Society, Hall first asked audience members to run down the characteristics of mammals (e.g., they breathe air through lungs; are warm-blooded; give birth to live young; nurse their young; have hair during some part of their lives). Marine mammals share those qualities, of course, but they also get all their food from the ocean. A walrus, for example, has a mouth that allows it to forage through sand to locate clams and other mollusks, the mainstay of its diet. 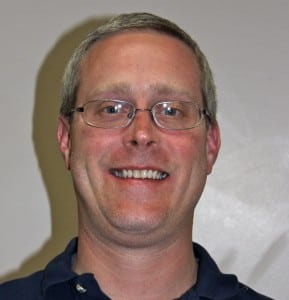 Mark Hall (photo by A. Rooney)

That description led Hall to utter a sentence few others could truthfully speak: “The walrus is one of the best animals I have ever worked with.” He encountered them early in what so far has been a 24-year career. After studying brain biology as an undergraduate, he shifted to marine biology in graduate school and began volunteering at the New York Aquarium, where he was called upon to help “walrus-sit” three babies, bottle-feeding them during the midnight to 8 a.m. shift.

Being so young, the animals also “wanted a lot of attention and got very comfortable with me,” he recalled. “At times I would be waking up in the middle of the night with a walrus on my shoulder, another on my face! They are extremely trainable, which is great because it allowed us to x-ray and vaccinate them.”

Hall, whose title at the Queens Zoo is animal department supervisor, explained how training the animals is not done to amuse visitors but to help zookeepers keep them healthy. While the slippery antics and “tricks” of sea lions, for example, are fun to watch, Hall said they are intelligent animals in need of stimulation. “For years zookeeping was just cleaning and feeding with not much thought given to animal welfare,” he says. “That has changed and now we think about their environment and recreation, providing animals with appropriate activities.”

The first step is to “give the animal something which re-creates what they do in the wild.” Some of the techniques include the hiding of food for the sea lions to search for and retrieve. “We try to get the animal thinking,” Hall explained, “and we also train for different sorts of behaviors, which will then allow us to take better care of the animals.” With sea lions, these include the “giving” of flippers and “target training,” or going to specific places.

In his work, Hall said, all the training is based only on positive reinforcement. “It’s all based on bond or trust,” he said. “It requires patience, and often takes a long time … It takes a special person and a lot of practice to do this work; you need to be observant, because timing is crucial.”  For instance, of the three sea lions acquired by the Queens Zoo after being rescued from the wild a year ago, one is only now “barely allowing me to touch him,” Hall said.

Hall and his colleagues use clickers and whistles as “bridging” techniques, which link an action and a reward through a sound. The sea lions are trained to move so that the keepers can observe their bodies to check for injury or illness. The maneuvers are essential when working with animals weighing just under 400 pounds, as these sea lions do. Some skill-building serves multiple purposes; training the sea lions to put their faces into buckets to “blow bubbles” is also a way to get them to ingest antibiotics placed into the bucket’s water. 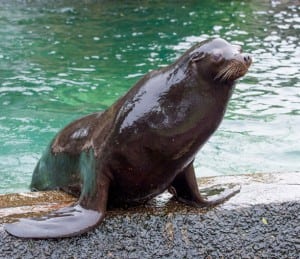 Then there is the feeding. Although it may appear that keepers randomly throw out fistfuls of fish, the fish has been analyzed for nutrient and fat content and there is a strict regimen of how much food each animal is served. “Behavioral cues allow us to increase or decrease their diet,” Hall said. The animals are also trained to get on a scale for monthly weigh-ins.

Some marine mammals, such as cetaceans (whales and dolphins) are more difficult to train because they don’t come out of the water. Some marine mammals are trained for highly specific tasks. For instance, the U.S. Navy works with harbor seals, teaching them to go into submerged airplanes and cars, undoing seatbelts. They have also worked with dolphins to locate unexploded mines along coastlines.

Protections are in place

After discussing the threats these animals encounter in the wild (poaching, pollution, overfishing of their prey food and being caught in nets intended for other species), Hall noted that a 1972 federal law prohibits the taking of marine mammals. Their care in zoos and aquariums is regulated by the U.S. Department of Agriculture, which inspects each facility twice a year, and by the Association of Zoos and Aquariums, which enforces licensing standards.

Hall said that while it may appear that zookeepers develop close bonds with the sea lions, walruses and other marine mammals under their care, the animals are not pets any more than you could domesticate a wolf or elephant. “We get close to the animals we work with and we love them, maybe,” he said, “but really, the sea lions don’t love us back.”