There’s a native plant for that

In my last column, I featured 10 plants that thrive in the sun, as recommended by Michael Hagen, the curator of the rock garden and the native plant garden at the New York Botanical Garden and formerly a horticulturist at Stonecrop Garden in Philipstown. This is the follow-up interview about strong performers for shady spots. Hagen says all of these are resistant to deer and will be strong performers in any garden.

It’s flowering now; its spiky blooms are up before the foliage comes out. It has lime green foliage that gets speckled with age. It’s not as aggressive as Japanese pachysandra and the foliage dies back in the winter but it performs much better and it’s a much nicer plant. There’s no reason to grow Japanese pachysandra. This is a great groundcover.

This is another great groundcover. It works nicely in combination with other spring ephemerals that come up through it like blue bells or wood celandine or bloodroot. The foamflower makes a nice carpet; when other plants die down, it’s still there covering the ground, looking good.

Our native bleeding heart will bloom twice. It doesn’t go completely dormant in summer. This is an attractive plant that needs to be used more.

Sedges are related to grasses and can be used as a lawn cover. There’s a sedge for whatever conditions you have. These two are some of the most attractive and adaptable. Pennsylvania sedge makes a nice carpet under deciduous trees and can be a grass substitute. Plaintainleaf has broader leaves. Both are good in dry shade.

Eastern North America is blessed with an abundance of great ferns and these are two favorites. Christmas fern is the hardest working fern out there. Right now it’s finished looking good all winter and getting ready to produce fronds. You can tidy it up but don’t have to. It will stay dark glossy green through the summer and into the winter. Maidenhair is an outstanding looking and delicate fern that is surprisingly tough for how it looks. It has thin, black wiry stems with a distinctive five-fingered frond shape.

This is certainly a good plant. It’s a little ephemeral. In a hot summer it can tend to disappear but it’s reliably perennial. It’s not as spectacular as some of the European geraniums, but with the pink color, it’s certainly a cheery plant and worth having. 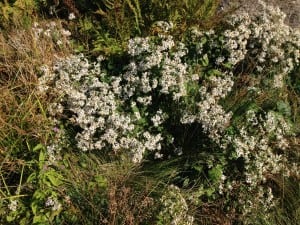 A lot of people think it’s weedy, but if it were something expensive or from Japan, they would be fighting to get it. Just because it’s something that’s native and seeds itself around, it isn’t as desirable. If you’re worried about it spreading, weed whack it or deadhead it.

If you see a carpet of this in the woods, it’s incredible. It’s valuable for pollinators, one of the last things to bloom and an important nectar source late in the season, which makes it an important plant to have in your woodland. There are other asters but they tend not to bloom reliably. It has nice, dark stems, too.

When I noted that I’d found native plants hard to come by at local nurseries, Hagen said they are becoming more widely available, but “it’s a little bit of a problem. You’re probably not going to find a lot of this stuff at big box stores, but it is available. Talk to your local nursery owner and let them know you want it. There are wholesalers out there growing it, it’s just letting nurseries know that the demand is there.”