While a stamp is a stamp is a stamp, the same cannot be said of post office boxes rented by the U.S. Postal Service. Walk into any post office in the country and your 49 cent stamp will be treated with true equality. Mailed from Garrison, New York, for example, that stamp is empowered to deliver a letter to any destination in the U.S., be it Goodnews Bay, Alaska, or Aina Haina, Hawaii or the westernmost reaches of … Garrison, New York.

Or the lobby of the same post office. Unlike a stamp, post office boxes are not interchangeable when it comes to cost. The evidence can be seen in a survey of post offices in Garrison, Cold Spring and Beacon.

Cold Spring and Garrison rent boxes in five sizes, ranging from 3.5-by-5.5 inches to 22.5-by-12. Beacon offers only three sizes, the largest being 11-by-5.5. Boxes at all three locations are available for renewable periods of three, six and 12 months.

Garrison is easily the best bargain, followed by Beacon. 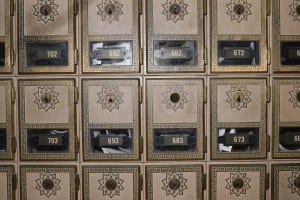 The cost of boxes varies at each post office (Photo by M. Turton)

George Flood, a spokesperson for USPS in the Westchester area, told The Highlands Current that across the country, rental fees for post-office Boxes are determined by USPS, not the local postmaster, and simply reflect “the cost of doing business” at each site. One difference locally is that the postal service owns the Beacon and Garrison offices but rents the Cold Spring site for its temporary trailer from the owners of Foodtown Plaza. (It does own the trailer.) Flood noted that the USPS does not pay taxes on the sites it owns but that in a situation such as Cold Spring the landlord factors in the cost of property taxes in determining rent.

The USPS is negotiating terms of a lease that would move the post office across Chestnut Street as part of the redevelopment of the former Butterfield hospital site. 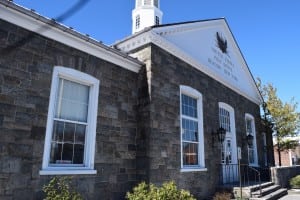 Residents and business owners can rent a box at any post office they like, regardless of their home or business address, Flood said. A Cold Spring business owner could take advantage of lower rates in Garrison if it proved to be economical after such costs as transportation and time are taken into account. Flood defended USPS rates, saying that they are competitive with those offered by private companies such as UPS and FedEx.

In some areas of the country, businesses sometimes go out of their way to rent a post office box in what they perceive as a prestigious locale, such as in Hollywood, California, Flood said. Admittedly, the prestige factor may be less significant for those choosing between Beacon, Cold Spring and Garrison. A more practical concern locally may be accessibility. In Cold Spring, boxes are available Monday to Friday from 8:30 a.m. to 5 p.m. and on Saturday from 8:30 a.m. until noon, while in Garrison, boxes are accessible 24 hours a day, seven days a week. Customers can access Beacon boxes Monday to Friday from 6 a.m. until 5 p.m. and Saturday from 6 a.m. until 1 p.m. 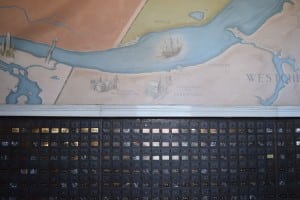 An historic mural above boxes at the Beacon post office (photo by M. Turton)

Individuals and businesses can rent and manage up to five boxes at a time online at usps.com. More than five boxes can be rented but arrangements must be made in person. Renters must be at least 18 years of age.

Post offices routinely post a notice warning renters: “Do not forget your P.O. box keys. USPS regulations forbid the handing of mail across the counter.” Flood said that the longstanding regulation is for security and protection of customer identity.