Evelyn Mary “Evie” Byrnes, 81, of Atlanta and Highlands, N.C., passed peacefully on April 6, 2016, after a valiant battle with pancreatic cancer.

Evie was born in Manhattan and raised in Garrison. She graduated from Ladycliff College in 1956 as valedictorian, then started her career with AT&T in White Plains. She moved quickly from engineering to data processing where she held numerous pioneering positions from programmer to division manager. After AT&T, she joined AMS, advancing to Southern Region vice president. 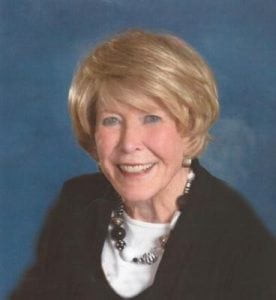 After her retirement in 2000, Evie volunteered at Atlanta’s Northside Hospital. In 2003, she and her husband established a home in Highlands, where she became a hospice volunteer. She served in local board leadership positions for Hospice and the International Friendship Center. She also served as a founder and vice president of the Hospice House Foundation of Western North Carolina.

Evie was instrumental in bringing Four Seasons hospice to Highlands and western North Carolina and served on their board. Prior to her illness, Evie worked tirelessly on a capital campaign to ensure that a hospice house is built to provide compassionate end-of-life care to the residents of western North Carolina. She was an active member of Our Lady of the Mountains Catholic Church, Bible Study and the Rotary Club of Highlands and a volunteer at the Bookworm and the Highlands Cashiers Hospital gift shop.

Evie is survived by her husband of 33 years, Kurt Mast, and stepchildren John (Donna) and David (Ashley) Mast and Jenifer (Michael) Dobbs, sister-in-law Debbie Mast, all of Atlanta. Known as the “matriarch” elder sister of the John and Evelyn Byrnes family, she leaves behind six of her 10 siblings: Gerald (Joan) Byrnes of Cape May, N.J., Lawrence (Kathleen) Byrnes of Somerset, N.J., Walter (Alice) Byrnes of The Villages, Florida, Sr. Ellen Byrnes of Lincoln Park, N.J.; Robert (Rosemary) Byrnes of Croton-on-Hudson and Paul Byrnes of The Villages.

She also leaves her sister-in-law Gail Byrnes of Atlanta, brother-in-law James Brady of Charleston, S.C. as well as countless nieces and nephews who always sought her wise counsel. Her beloved siblings John, Charles and Garrett Byrnes and Margaret Brady, whom she now is reunited with, precede her in death.

In addition she leaves behind scores of friends in Highlands, Cashiers and Franklin, N.C., St Simons, Atlanta and New York. Evie Byrnes was a beautiful woman who possessed elegance, style and grace. She was a fine listener who made an impact on all who met her. Her abiding faith, warm smile, wise guidance and gentle demeanor are gifts she leaves to all of us. She enjoyed the company of many dear friends and devoted her time to faith, family and service.

A Mass of Christian Burial was held April 11 at Our Lady of the Mountains Catholic Church in Highlands. A memorial mass will be celebrated in Cold Spring this summer.