The permanent collection at Boscobel House and Gardens in Garrison, much of it displayed in its Federalist mansion centerpiece, includes many pieces of furniture and decorative arts heralded as masterworks and made in New York between 1800 and 1820. Now, two centuries later, the collection has been joined, at least for the next few months, by their contemporary equivalents: furniture designed and hand-crafted by the renaissance of woodworkers and cabinet makers in the Hudson Valley.

Hudson Hewn: New York Furniture Now, which opens April 16 and runs through Aug. 14, displays “old” furniture and objects and “new” together in the Exhibition Gallery and, in artful contrast, throughout the period rooms of the house itself. The hope is that “visitors can appreciate the iconic views and still see how contemporary design can interact with that,” says curator Jennifer Carlquist. “So much of Boscobel is in pairs; by removing one and putting a contemporary object in its place you get a dialogue, a punctuation point.” 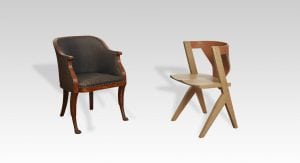 There are 37 objects in the show, with around a third located in the mansion, where some objects were removed for the exhibit to allow the contemporary objects a chance to be seen functioning within the room.

In some instances, chairs or other pieces of furniture, emblematic of what was au courant, are paired with something put to the same use, but in different form, now. For example, a barrel-back cabriole chair made of mahogany, beech and pine from around 1795-1805 is paired with a conceptually similar modern creation in ash and waxed canvas by Celia Gibson and Michael Moran of Moran Woodworked Furniture. 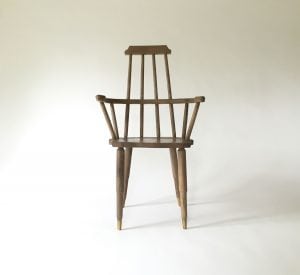 The Jupiter Windsor Chair, designed by Dzierlenga Furniture of Salt Point, NY, is made from reclaimed and bleached, spalted maple. (photo provided)

The same goes for a trio of Windsor chairs: an example from hundreds of years ago with two recent designs, where “each interprets the vernacular form in different ways, and all of them can work anywhere — from porch to dining room to parlor,” Carlquist says. Furniture has always defied classification, she notes, because it can be considered fine art, sculpture, decorative and a craft, sometimes at the same time. “It can have a narrative, or just be about aesthetics or about function,” she says. One part of the exhibit, in particular, poses the question, “What is sculpture and what is furniture?”

The work of 17 artists and designers, most with a background in fine arts, is shown in Hudson Hewn, but they are “standing in for hundreds of others in the Hudson Valley,” Carlquist says, noting that each designer had to have one or two pieces which could relate to historic design and also to the permanent collection. “We started with about 60 furniture makers and narrowed it down,” she says. Initially, none of the 17 selected to participate had ever been inside Boscobel, but upon visiting, many took inspiration from what they discovered.

Carlquist found the makers from extensive clipping files she maintains, and a great deal of research looking at online blogs, which she calls a tremendous resource. There is indeed a furniture-making movement in the Hudson Valley, one related, says Carlquist, to similar ones in cooking, gardening and many other back-to-the-earth, “slow” activities.

“People are interested in their life reflecting this place, and that was true in the early 1800s as well,” she says. “Living this way now draws people here, because you have to have space and an abundance of locally sourced, often reclaimed, wood. The Hudson Valley has a long tradition of wonderfully rustic furniture, all made in keeping with the environment.” 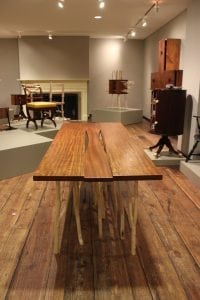 “Stick Table”  by David Morton of Big Tree Woodworks mixes the fine (a mahogany tabletop) with the rustic (maple saplings supporting) just as Eliza Dyckman did with mahogany and bamboo chairs in Boscobel’s heyday. (Photo by A. Rooney)

Speaking of Moran Woodworked Furniture, specifically, as an example, Carlquist says, “They work with salvaged trees, and they know every tree. To them, furniture is a rebirth of that tree.”

Hudson Hewn will be open during regular museum hours and is included with admission to the house or grounds. An illustrated catalog will be available in the gift shop. There will be several exhibition-related programs over the next few months. See boscobel.org for details.