What should and should not go in the bin

In March, the Cold Spring Highway Department collected 63 tons of trash as part of its weekly curbside pickup. The haul was transported to the Wheelabrator facility in Peekskill, which charges a “tipping fee” of $77 per ton for disposal. The cost to the village, including a 2 percent environmental surcharge, was nearly $5,000, or about $60,000 a year, not including wages and transport. 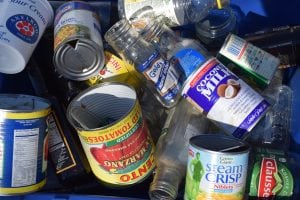 Glass, aluminum, paper and plastic can be recycled. (Photo by M. Turton)

During the same month, 12 tons of recyclables were picked up in Cold Spring. Those materials were taken to ReCommunity in Beacon, which has no tipping fee.

Had those 12 tons been discarded as trash, the additional cost to the village would be $11,000 annually. Had the figures been reversed — 12 tons of trash and 63 tons of recyclables per month — the village would save about $48,000 per year in tipping fees.

While some environmental challenges such as fracking or disposal of nuclear waste are beyond the ability of individuals to address, reducing trash relies on individual effort and habits. With Earth Day approaching on April 22, it is an appropriate time for village, town and city residents and families to reexamine their recycling habits. 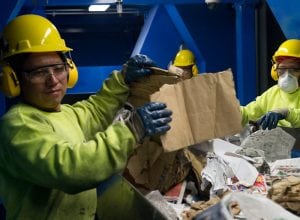 Sorting paper and cardboard at the Beacon facility (photo provided)

In Cold Spring, “single stream” recycling is used — meaning that all acceptable materials can be placed at the curb in the same container. Recyclables are picked up early Friday morning and can be put out at the curb the night before.

What can be recycled

The following materials are accepted by ReCommunity:

What can’t be recycled

More detailed information on recycling, including a video of the process, can be found at RecyclingSimplified.com. Much of the video was shot at ReCommunity’s Beacon facility.