The actor Judith Kalaora will portray Deborah Samson Gannett (1762-1827), the first woman to enlist, fight in and be honorably discharged from the American military, in a one-woman show at the Trinity Episcopal Church in Fishkill at 2 p.m. on Saturday, April 30. 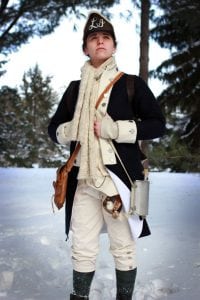 The Fishkill Historical Society is sponsoring the performance as part of its Ellen Lachowicz Memorial Lecture Series, in part because Gannett spent time in Fishkill during her service.

Gannett, an indentured servant by the age of five who became a schoolmarm and farmhand, enlisted with the Fourth Massachusetts Regiment of the Continental Army under the alias Robert Shurtlieff on May 20, 1782, while wearing an old soldier’s uniform with her chest bound and her hair tied back.

Tickets to the performance are $10 for society members and $20 otherwise. They must be ordered by Thursday, April 21, using the form at fishkillhistoricalsociety.org; only 100 are available. Any unsold tickets will be available at the door. The church is located at 1200 Main St., near All Sport.