More than 10 years after the application for federal funds and four village mayors later, the Main Street Project is underway in Cold Spring.

A public meeting is scheduled for 7 p.m. on Monday, April 25, at the Cold Spring Fire House, 154 Main St., to share details about the project. Village officials will be joined by representatives from CHA, the project consultant, and Con-Tech Construction, the contractor, to describe the work and the project timeline. 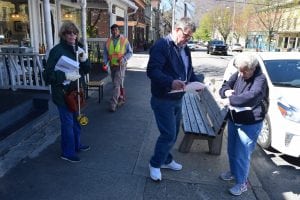 The information may be of particular interest to Main Street merchants, residents and landlords. Information is also being made available on the village website at coldspringny.gov and its Facebook page at facebook.com/vcs10516.

The project, which got underway on April 20 with workers marking broken concrete, will include improvements to badly deteriorated sections of sidewalks and curbs along Main Street from High Street to Depot Square-Lunn Terrace. Curb cuts compliant with the Americans with Disabilities Act (ADA) will be added. Sidewalk, curb and drainage improvements as well as paving will also be done on Furnace Street. The work is expected to take five to six months.