In they come: why, there’s the man who used to deliver the mail — and, by gum, that young girl has grown nearly half a foot. A running commentary of this sort has gripped the readers and viewers of Thornton Wilder’s Our Town for seven decades but also could be the ruminations of someone sitting on a Main Street in this or another town today. That’s precisely the point of both the play and of the Hudson Valley Shakespeare Festival’s (HVSF) production, inspired by the Public Theater’s Public Works initiative, that will come to life over the Labor Day weekend.

Community members from Beacon, Cold Spring, Garrison, Newburgh and Peekskill both are iterations of the people described in the iconic play and, by attending one of eight preliminary workshops conducted by the HVSF, demonstrated their hope to be included among the actors portraying those people or working behind the scenes.

At a workshop held April 9 at the Desmond-Fish Library in Garrison, 42 intrepid potential thespians signed in for two hours of activities led by  Our Town director John Plummer. He asked the group to form a circle and urged them not to look at him but rather to direct their gaze at each other. 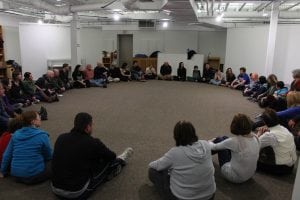 After the activities, participants learned about the nuts and bolts of the next few months.(Photo by A. Rooney)

“Really study them, take them in, one person at a time,” he instructed. “How far are their feet apart? As you’re studying these people allow yourself to ‘write’ a narrative about them … Allow yourself to write their story. Try to see the complexity of them. In the way they stand you can divine something about their character. You’re the playwright, in your mind.”

Plummer next had participants alter their stance, got them walking, forming and re-forming circles, letting others look deeper into their eyes. He added drum beats and suspension/release reactive motion to the beats. This turned into light jogging, then jumping, in sync with each other, eventually doing the same without the cue of the drum.

These exercises, and those which followed, some of which involved the placement of hands on “stranger’s shoulders,” were all aimed at achieving the connectivity essential for a cast to cohere. “Tune in to invisible bonds, believe that you can do this,” he said. “It’s like theater: if the audience isn’t giving a lot to you, double down and give them more.”

The second part of the session focused on a long jump rope, turned by HVSF Associate Producer Emily Knapp and Sean McNall, HVSF’s associate artistic director and one of three professional cast members who will appear in the production. Explaining that each person needed to jump in and through, and being met with more than a few “oh no” visages, Plummer told them: “If you’re afraid, go sooner, leap forward and face your fears. When one is jumping, all of you are jumping. There’s no backstage, you’re all rooting for the actor, the jumper. If you believe in them, they’ll make it through.” 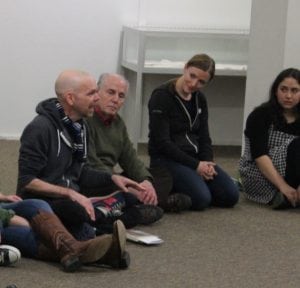 John Plummer (center) talks about the logistics of the production (photo by A. Rooney)

And sure enough they did, in fits and starts. Two of the youngest had the most difficulty, and Plummer had them face each other, joining hands, telling them not to look at the rope. “You’re going to get each other through. Don’t wait: go!”

After a few more turns of the rope, they made it through, as Plummer championed the moment, “What you saw the two guys do: that’s drama. They fight through, they get killed — a tragedy! They get married — a comedy! We feel a sense of catharsis … that was super hard; that was theater. We want to create a show where people applaud for that reason, because something got pulled out of you.”

Finally, Plummer called for a circle again, and spoke of what was at the core of all the exercises: “We need to push that ego down, get rid of the ‘I’ parts of ourselves and connect a ‘we’ instead. Especially when we’re doing a play called Our Town. Let’s do a play about our town made by our town. A town where boundaries are porous. Boundaries between stage and audience get invaded just as, late in the play, boundaries between life and death get broken.”

Plummer invited the attendees to the next level of workshops, to be held on April 23 or 30, in which the actors will work with the text. Auditions will follow in May, and although not everyone will be cast because of the number of people who have shown interest, there are a host of other ways people can participate backstage. There’ll be something for everyone to do, he said. Rehearsals will begin in July and will increase in frequency and duration as the summer moves along. Participants should expect a commitment of anywhere from three to six rehearsals a week in August, he said.

Plummer’s parting words to the group were that “we want this to be a great show, not just, ‘Oh, it’s a nice thing they did for the community.’ ”

Interviewed after the workshop, several participants concluded they were raring to go. Ron Sopyla of Beacon, a theater teacher at a New York City public school, said when he does things now it is largely as a storyteller. “I miss being in an ensemble,” he said. “I thought this would be a fun way to become part of one.” Sopyla said while he expected the workshop would include theater games, “the jump rope was a surprise, but I made it!  I’ll do anything to be a part of this.” 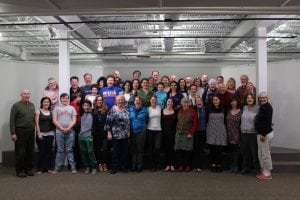 The participants and directors at the Our Town workshop on April 9 at the Desmond-Fish library (photo by A. Rooney).

Daniel Phillips, 11, of Cold Spring, had a similar response:  “I love HVSF, I watch all their shows. Today was a different way of interacting and I totally want to do this show.”

Linda Mueller of Cold Spring is perhaps exactly what HVSF had in mind when the notion of a community show was considered. A physician at NYU, she called this “completely unrelated to anything I ever do.” Mueller’s daughter, a former HVSF apprentice turned actress and, more recently, a nurse, told her about the workshop. “She said ‘Ma, you’ve got to do this.’ When you go to see plays, you’re always watching and you don’t know what actually goes on to get them there. HVSF has been amazing and I definitely want to be a part of this.” 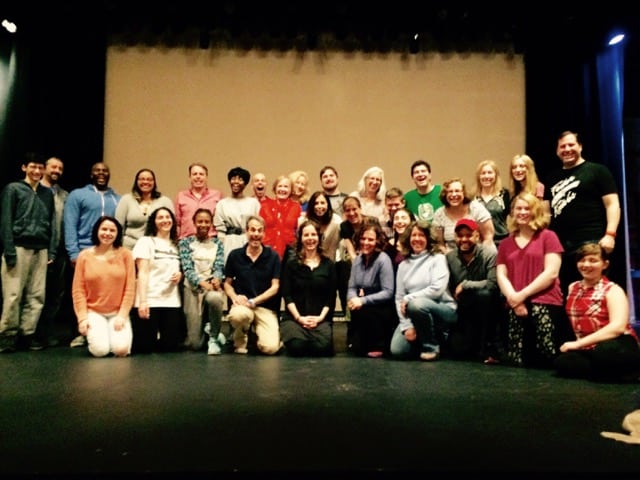 The Peekskill workshop, held at the Paramount Hudson Valley. (Photo courtesy of HVSF) 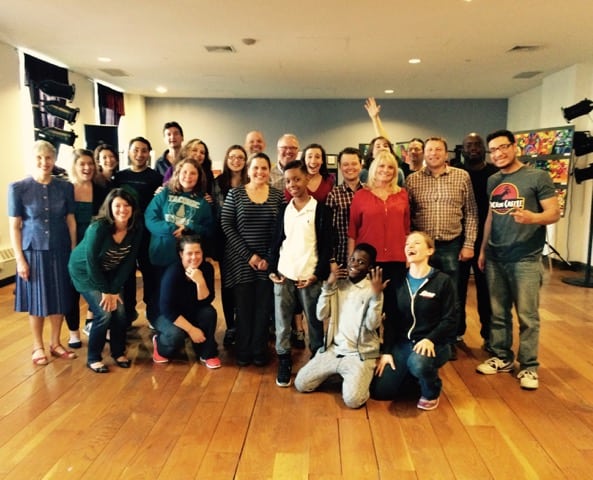 Participants in the Newburgh workshop, held at Safe Harbors of the Hudson.  (Photo courtesy of HVSF) 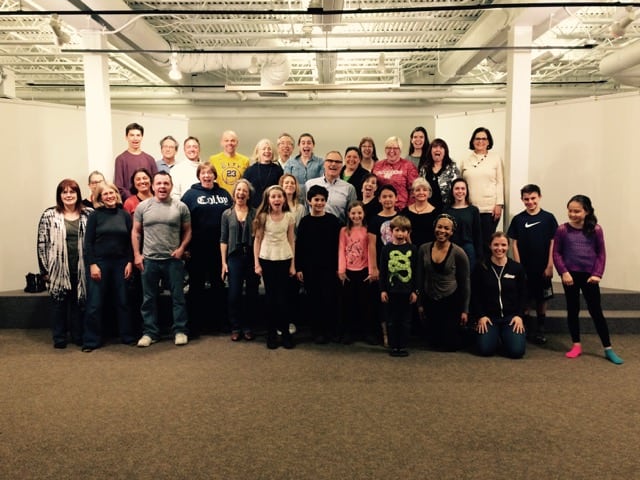 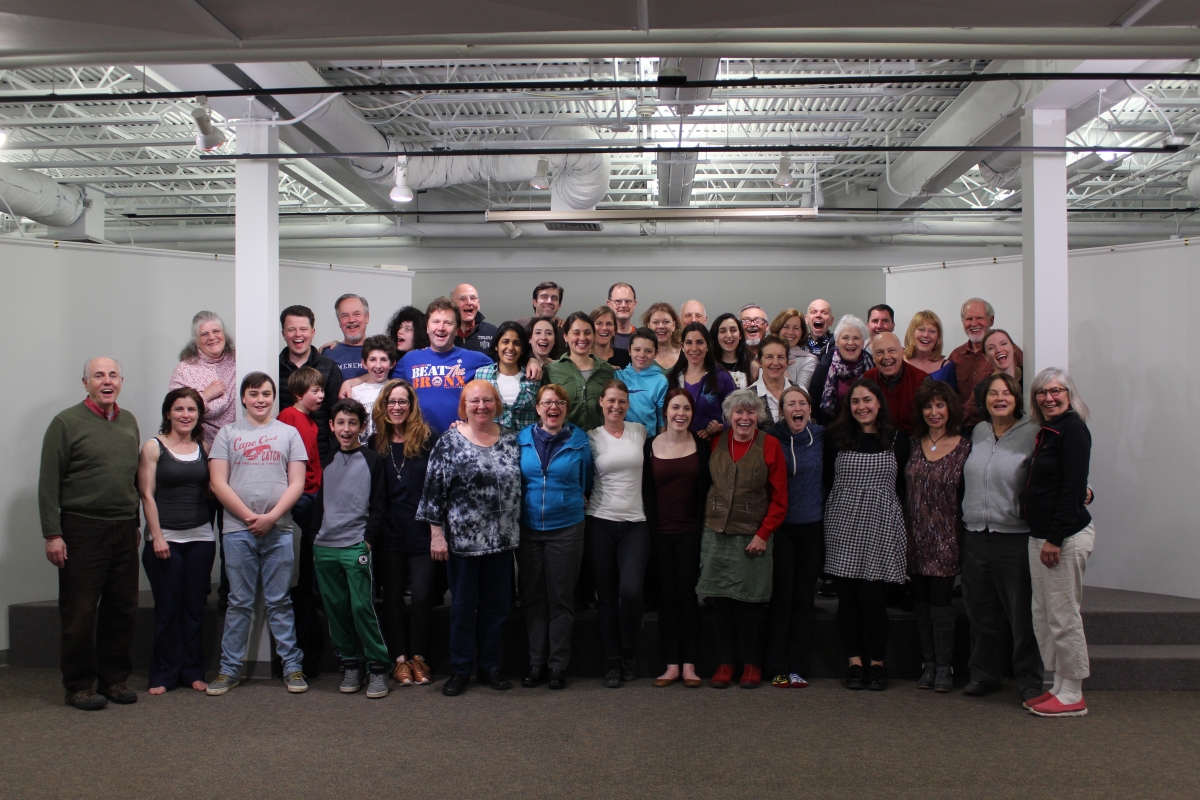 The participants and directors at the Our Town workshop on April 9 at the Desmond-Fish library (photo by A. Rooney).