Tips to keep the hive healthy

“Stinging is part of beekeeping,” concedes Rodney Dow, who has a bee hood ornament on his pick-up and “Bee Happy” painted on the tail gate, “but the venom keeps your joints fluid!”

A commodities trader by day, the Garrison resident has kept bees for more than 50 years and clearly loves the little hummers that drift out of his hives at Glynwood Farm in Cold Spring. He spoke there at a workshop on April 2 about how to help bees thrive. 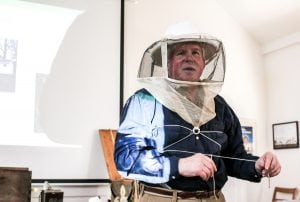 Apiarist Rodney Dow presented Make Your Bees Thrive at Glynwood Farm in early April. Spring is when hive-building, breeding and honey-making begin. (Photo by A. Peltonen)

So as not to startle his charges, Dow says he warns them he’ll be opening the hive to clean, collect honey or remove the Varroa mites that have, along with climate change, contributed to the colony collapse threatening the food chain. According to the U.S. Department of Agriculture, bee pollination is responsible for about $15 billion worth of crops each year.

The best time to go into the hives is mid-day, Dow says. Any other time and you’re likely to find the bees testy. But he quickly reassured his audience: “Raw honey has natural peroxides to heal wounds!”

To best learn to beekeep and make sure you can tolerate stings, Dow suggests newbies apprentice with experienced apiarists. The initial housing and starter hives will cost about $500. Dow, who in the 1970s taught agriculture at SUNY Farmingdale, also shared details of which plant and crop pollens make good honey: basswood and honey locust trees, legumes and buckwheat. 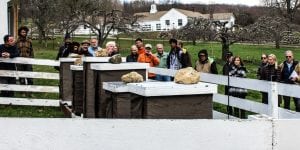 Dow (white-haired, behind hives) answers questions on beekeeping near his established apiary at Glynwood Farm. The hives are strategically located near fruit trees and perennial flower areas. (Photo by A. Peltonen)

A crucial factor in keeping a hive healthy: keep it dry. Honey bees can survive at minus 30 degrees Fahrenheit unless moisture has taken hold.

To get rid of mites, which suck on honeybees, lay eggs in bee larvae and transmit deadly diseases to them, Dow recommends simple remedies. “Spray Pam [cooking spray] on the bottom board,” he says. “The mites will stick to it. Afterward, count the number of mites you catch. If it is more than 20, treat again.”

The highest tolerable ratio of mites to bees is 2 percent, he said. Oxalic and formic acid also put pressure on the mites. Eventually, says Dow, the genetics of the mites and bees should help turn the situation around.