Cold Spring’s Main Street project is finally breaking ground — almost. More than 40 residents, landlords and shop owners filed into the firehouse at 154 Main on Monday evening (April 25) to hear when, where and how construction will proceed, and how it will affect them.

The project will replace the worst sections of decayed sidewalks and curbs between Lunn Terrace and High Street, making them compliant with the Americans with Disabilities Act (ADA). Lighting will be enhanced and new trees added. Furnace Street will also be reconstructed.

Monday was supposed to be day one of construction on the five- to six-month project. Temporary “No Parking” signs had been erected the previous night from Lunn Terrace east beyond Rock Street, the first section to undergo improvements, with work expected to begin in early morning. But Mike Hurtt, senior vice president with CHA, the project consultant, and Anthony Carino, project manager with Con-Tech, the contractor, said that the start was delayed because the New York Department of Transportation (DOT) had not yet inspected and certified the quarry stone to be used. If the village were to proceed with construction without DOT certification it risked losing project funding, Hurtt explained.

Carino told The Current on Tuesday morning that with the DOT delay and the day’s rainy weather, jackhammers would likely begin to rip up the old sidewalks on Monday, May 1. Normal parking will be allowed until that time.

“There’s going to be some hurt involved in this,” Mayor Dave Merandy said in opening Monday’s informational session, “But we’re going to limit it as best we can.”

Construction will take place Monday to Friday from 7 a.m. to 3 p.m., with no work on weekends. Merandy, Hurtt and Carino stressed that access to businesses, homes and driveways would be restricted for only short periods of time, especially when jackhammers are in use and concrete is being poured. Otherwise, gravel walkways or wooden walkovers will provide access. In some situations, pedestrians may be directed to use the opposite side the street or the parking lane. 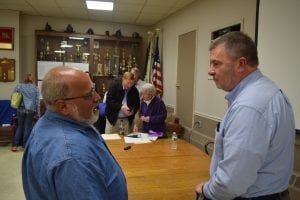 One block will be under construction at a time as work proceeds east up Main Street. Parking will be prohibited in the block where work is taking place.

Furnace Street will undergo a makeover that includes new sidewalks and curbs, repaving and improved drainage. Parking will be restricted on construction days but available at night.

Deputy Mayor Marie Early said the schedule calls for work to be completed by Oct. 31 but that the project could be “substantially complete” by the end of September. She cautioned that progress could be slowed if Cold Spring has a rainy summer.

Con-Tech has a financial incentive to finish on time. Hurtt said the contract calls for fines of $1,500 a day if construction goes beyond the end of October.

Those in attendance peppered village officials, the contractor and consultant with questions for close to an hour. Tara Carol, co-owner of Old Souls, read a letter from the Cold Spring Area Chamber of Commerce in her role as the organization’s vice president. The concerns centered on parking, access to properties, impact on businesses, possible effect on special events, weekend and holiday visitors, emergencies and scheduling.

“This is make or break time for Main Street businesses,” Carol said, adding that little information had been conveyed to business owners about how the project would proceed.

Merandy said that as soon as bids were received events had moved quickly. Commenting on the project schedule, which was announced this week, he said, “I found out about the same time you did.”

Hurtt said that the project will unfold using a “look-ahead” schedule posted on the village website detailing areas to be affected two weeks in advance. He said he is confident the contractor will complete work quicker than the planned general schedule. 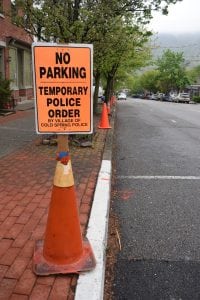 Parking will be restricted on blocks as they undergo construction. (Photo by M. Turton)

Craig Muraszewski, co-owner of The Cold Spring General Store, wondered about the impact of flying debris and dust on storefronts. Carino said crews would protect store windows using plywood or other materials when jackhammers are in use and that a hose used to clean concrete saws could also be used to hose down storefronts. Hurtt added that photos of all Main Street properties would be taken before and after the project to determine if any damage occurs.

Two ideas were presented to counter the loss of parking spaces during construction. Cathryn Fadde, the owner of Cathryn’s Tuscan Grill and a former village trustee, suggested parking normally banned on Fair Street be allowed during the project. Barbara Galazzo, owner of Gallery 66 NY, said that the parking lot at Our Lady of Loretto Church might also be used on weekdays. “There’s 50 spaces there,” she said. Fadde, who serves on the village parking committee, said insurance issues might prevent that.

Hurtt advised residents to contact the Cold Spring Police Department if an emergency arises during construction. CSPD will have all emergency contact numbers, he said, including the contractor who will be available 24 hours a day. Project headquarters is set up at the village truck yard.

Monday’s session was videoed and will be available at coldspringny.gov and on Facebook at facebook.com/vcs10516.

One thought on “Breaking Up The Concrete”